Spending the Weekend with Carlos and Bill

I spent Memorial Day Weekend with Carlos and Bill.
They are my new 'best friends'.

I don't think Hubby was too upset, or jealous;
However he might have been a bit miffed when dinner was late because I was with Carlos and Bill.
He might have been a bit impatient when I didn't get out to the car right away because I was hanging with Carlos and Bill.
There's a chance that hubby was disgruntled when I didn't respond to a question now and then, because I was so absorbed in the conversation between Carlos and Bill.
I will have to say that Hubby was rather generous when I brought Carlos and Bill along in the car with me.
Hubby's like that! He's a good guy! Especially since Carlos and Bill are characters in a novel by Lisa Deon, AKA The Slave Driver.
You may recall that when we visited Park City we took a jaunt into Salt Lake City and arranged to meet the Slave Driver. The Slave Driver also wrote a post about our meeting. We took a carriage ride around Temple Square with her. Lisa was excited to show me the ARC (Advanced Reader Copy) for her novel, The Carriage Trade. She explained that friends were reading the copies and doing the final edits before the novel is published in mid-June. I casually mentioned (nodding my head a lot, smiling, and maybe jumping up and down a bit) that I'm pretty good at editing and when it's time for her next novel to be edited, send it my way. 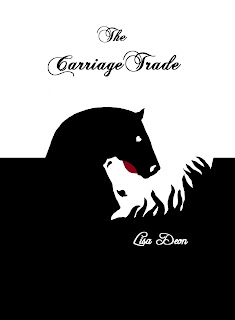 A few days after our return home I received an email from Lisa asking if I'd care to edit The Carriage Trade if she sent it to me electronically. Wow! I'd LOVE to! The only hitch was that time was a bit tight.... like, it's now Friday and she'd need my edits by Tuesday. Sure - no problem! I mean, it's a holiday weekend. I'm working sheep at a herding dog trial each day. No sweat!
So, I began reading and marking a few things hear and their (sic). You know how hard it can be to catch those silly errors that crop up.... and, as Lisa said, she's read it "a jillion times," and her brain is "perma-fried!"
I'm so glad that Lisa's a great writer and there were few errors. I find it difficult to edit work that is poorly written. The hard part was staying on task, and not getting lost in the story... that happened more than a few times! Lisa describes her novel in this way:

How do you get to a "Happily Ever After" when you can't remember where it began?

Carlin "Carlos" Farley's life is an open book. Unfortunately, she can't remember most of it. She's losing her barn manager, Bill, the guy who's been running her horse drawn carriage business while she's been in extended care recovering from an accident. Bill has always been there for her, in fact they've grown up together, but now he wants to pursue the career he put on hold and Carlin's resigned to the idea that he's leaving her.

Bill Fantazma is the kind of guy who always tries to do the right thing. But sometimes doing the right thing is not the right thing to do. He's been in charge of Carlin's care and the business he helped acquire for her, and has accepted the accident and her subsequent brain damage as a chance for a "do-over", since his previous actions to attract her affection were less than honorable.

Richard Cooper appears to be the answer to their business problems. Knowledgeable about horses, willing to step in and take over the barn manager position, helpful and solicitous to Carlin, he's not put off by her sometimes bizarre and quirky behavior.
But when Richard sees an opportunity to move in and draw Carlin's affection, Bill realizes just what she means to him and must make a decision; come clean about their past and risk her anger, or step away and allow Richard to have a romantic relationship with the woman Bill has loved all of his life.

It's a romance she can't remember and he can never forget.

The novel is now published.
Congratulations to Lisa.
Her 'baby' has been born!
(After 5 years of hard labor.)
If you are interested in reading "The Carriage Trade",
the trade paperback is now available for purchase through Createspace
and the Kindle edition is available through Amazon.