We Dreamers knew that a Punkin Chunkin' competition was held nearby. However, one year it was really hot. Another year it snowed and then last year they did not have the competition. So, when we saw that the competition was on this year, and the weather was nice, we went on over for an afternoon to watch pumpkins being heaved as far as 4000 feet by amazing contraptions. 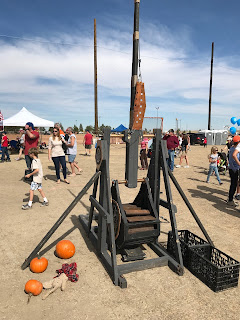 The contraptions used to toss the pumpkins came in many different shapes and sizes. The smallest were some trebuchets. One built by students and one built by a dad with the help of his two young girls. They reminded me of our son's trebuchet. 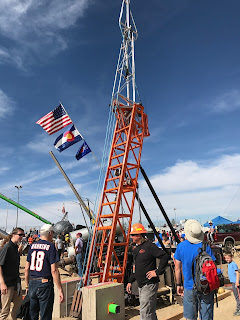 There were several machines that were not traditional trebuchets or catapults. One of my favorite machines was powered by multiple garage door springs. It was called, "Not in my Driveway". Apparently the builder's wife was not as enamored with the project as the builder was! 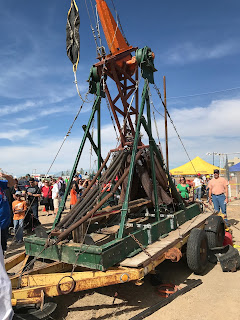 We learned that the pumpkins used are grown by the competitors. They grow a few unusual varieties of pumpkins. They are known for their round shapes and their thick skins. The pumpkins have a weight range, around 8 pounds, and will begin to lose weight immediately after picking. The pumpkins must exit the chucker in one piece. 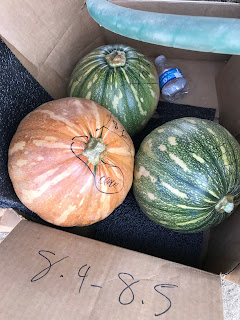 The air cannons shot pumpkins the furthest. Each cannon has some sort of tank that is pressurized. The more pressure... the greater the distance (assuming the pumpkin comes out of the end of the cannon in one piece.) For the final shot one of the cannons pressurized to 200 lbs/sq inch. Their pumpkin shot well over 4000 feet! 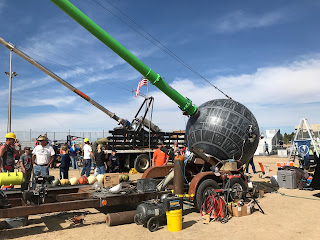 The National competition was halted and was not aired recently when a woman was hit by a piece of metal from an air cannon. From more recent reports it appears that the woman, a journalist, will be OK and she is sad that the competition was stopped. 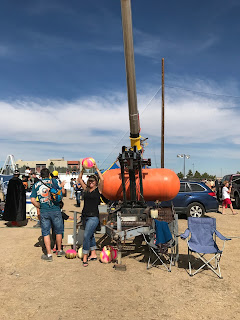