I have struggled with my laptop for a few months. The space bar, and a few other keys in the same area, have not worked reliably. I figured I had crumbs and dirt under the keys, and they were impeding the motion of the keys so that the whatchamacallit under the spacebar wasn't hitting the whadingy below and sending an electronic message to the whoseywhatsit. Whenever I typed, I had to watch what was registering, so that I could hit the space bar again, and again... however many times it took to "click"! It was very annoying. I tried vacuuming the keyboard. I used the upholstery brush with the vacuum. All to no avail.

Plan B... I'll use my iPad. I opened it, and the start-up screen with the Apple on it appears... and doesn't disappear. Another time it started blinking. I Googled "my iPad opens with the start-up screen but doesn't do anything." I tried some of the fixes I found online and was able to get it up and running a few times, but it kept coming back to the Apple, despite my fixes and my updating software.

I Googled "my MAC book space bar doesn't always work" to see if there was a recommended "fix". (What would I do without Google?!) It turnes out that to keep the slim profile of the MAC machines, a different "spring" was developed to create the same feel as a regular keyboard. This "Butterly" spring has developed a high rate of failure. Ah hah! It wasn't necessarily crumbs impeding the movement.

So, I made an appointment at the closest Apple Store Genious Bar... for my laptop AND my iPad.

The iPad turned out to be a bit more problematic than the MAC book. The technician plugged it into his computer so that it could run diagnostics. It didn't work. He pulled out a different cord, and tried again. It didn't work. He found another computer, and tried again. It didn't work. He borrowed another cord from a coworker... ta daaaaa! It finally ran the diagnostics. However, despite the diagnostics apparently finding the problem, the iPad would not progress past the Apple start-up screen. As my iPad was still under extended warranty (I am so glad that I bought Apple Care) I was given a new, refurbished unit.

Next, the technician tackled my laptop issue. He tried the keys and agreed they did not work correctly. He took the unit into the back to open it up and have a look. When he returned, I asked if the problem I was experiencing was due to the mice. He looked at me with a quizzical expression. I pointed out that with the amount of crumbs that were probably under the keys, there must be a family of mice in there as well. He laughed, and assured me that there were no mice, probably because the snake that had moved in had taken care of the mouse population! 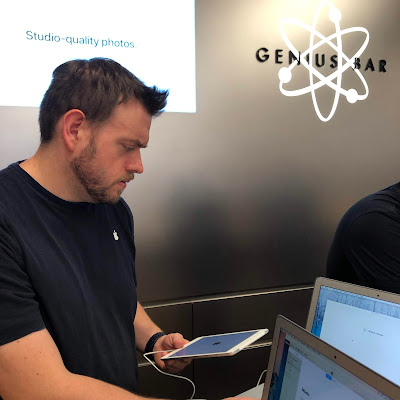 I had to leave my laptop at the store. I received a notification the next morning that it was ready for pick-up. I am now typing on my repaired laptop which has remarkably springy keys and a spacebar that works! Hallelujah!

Fui a Rochester en un avion una día después de tener una ventana nueva.  (I went to Rochester in a plane one day after we have a new window.... haven't been introduced to "windshield" yet, and verb tenses are still beyond my reach!)

Was it only a coincidence that the windshield arrived a day or so after the Mister told the expediter that the lane sense was having trouble reading the lanes due to the crack, and sometimes tried to turn him into a different lane, and perhaps this was unsafe? Hmm....

But anyway, I had my reservations to fly, so fly I did. Sarah and I had planned to stay at the same hotel. She was driving up from New York as she wanted to stop and see some of her friends on the way. I took a Lyft to the hotel, and walked into the lobby at the same time that she walked in from the parking garage! We went off to the first event for the reunion weekend, a reception at the School President's house. It was delightful. There were about 6 folks from my class, and a few from classes ahead or behind my class. I also met Jim Townsend. He is a friend of Lani and Jim Ulrich, good friends who live at RiverBend in the winter. How uncanny that they discovered he was going to a HS reunion... and then, it turned out, we were going to the same HS reunion!

The next morning we had breakfast with my 10th grade sweetie and his family. It was fun to catch up with him, and to meet his daughters. Bethany, his oldest, lives in San Francisco. I would love to visit with her again... and, just maybe, get David in the picture, too! (Can you hear strains of "Matchmaker, matchmaker... make me a match?!)

The most impressive part of our visit was seeing a video about a Harley elective, "Hospice". Students learn how to provide hospice care and volunteer at different facilities in the area. The learning goes so far beyond the care aspects. It sounds like a phenomenal program. The founder of the program, Bob Kane, sent a letter to be read at the event. He sent his apologies about not being able to come to the event, and hoped that we enjoyed the video. He explained that chemo has done all that it can for him, and he is now on hospice. I am thinking that every student he touched with this program would give anything to be his hospice provider, as he enriched their lives in such an unusual way and they have a much different view about the end of life. Wow!

Following the reunion, since I was "in the neighborhood" I flew to Manchester, NH to see my BFF, Marjie. More talk, talk, talk... and we did some quilting on her long-arm machine.

Some pictures of the weekend: