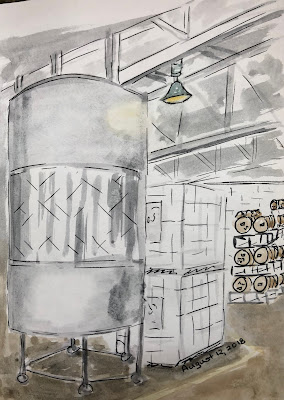 Do you recall that wonderful "I Love Lucy" episode at the chocolate candy factory? The one where Lucy and Ethel can't keep up with the candies coming at them on the conveyor belt. I worked with seven other people recently to bottle wine. We all commented that we felt like we were on that episode, but with wine bottles. As much as we would have liked to have tucked some bottles here and there to speed up the process, it just wouldn't work!

We have become members of a local winery. One of the benefits of membership is that we can go to their tasting room, a convenient mile from our home, and have a free glass of wine. Many evenings we ride bikes to "Rigger's Loft" to enjoy our free glass, then head home for dinner. Members received an email inquiry asking for help bottling. We both decided it sounded like it would be interesting. So, Wednesday morning found us at the loft, ready to learn what we were to do. 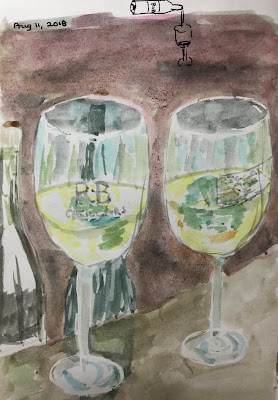 There were seven stations in the bottling process.

Station 1. Bottles are dropped onto a table by the case. If you hold the carton by the corners, and place it open side down,  you can lift the carton off the bottles and most of the time the cardboard grids stay in the carton. The cartons are piled on the floor and will be taken to the other end of the line to be filled with full bottles of wine. The bottles have to be "sparged". A quick jet of nitrogen is blown into each bottle using a hand-held tool similar to a tire inflater. The jet of nitrogen blows any dust in the bottle out, and stays at the bottom of the bottle keeping any contaminated air out of the bottle. 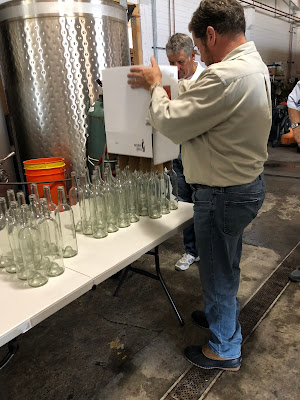 Station 2. The filler grabs each prepared bottle and pushes it up to a nozzle. On this particular machine there were six nozzles. A long 2" diameter hose runs from the tank to a hopper at the top of the filler. The wine is gravity fed through each nozzle into the bottle. If the filler is set up correctly, wine will stop flowing at the exact "full" point.  (At first we had some problems with too much wine in the bottles... the corks were not going in all of the way.) When the bottle is full, the filler lifts it out of the nozzle and puts it on the table. 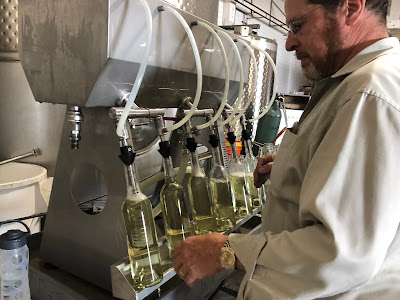 Station 3. The corker operator (that was me for quite a while) grabs the full bottle with his/her right hand. It is pressed into a "V" in the machine which has a switch that activates a piston, driving the cork into the bottle. The bottle is then lifted out with the left hand and put on the next table.

Station 4. The foiler places the foil cap over the top of each bottle. No machine is involved! It sounds simple, but this is one place where we would run into a bottleneck (I just had to use that term!!) The foil caps are nested, making a long tube, and it takes some finesse in getting just one cap off.

Station 5: The foil shrinker grabs a bottle with the right hand and places it on the platform of the machine in a V made by two pieces of wood. Then the operator must use both hands to push two buttons. The machine lowers over the neck of the bottle and emits heat and pressure which shrinks the foil. When the machine lifts, that bottle is placed on the table to the left and the next bottle on the right is placed on the bed of the machine. 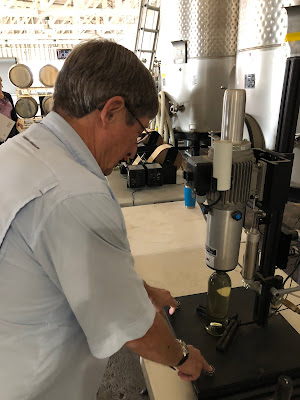 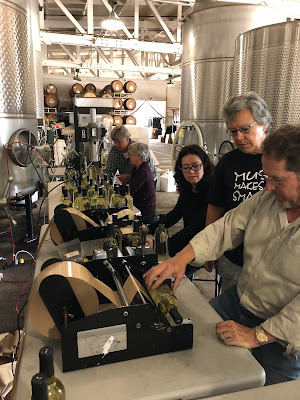 Station 7: Full, labeled bottles of wine were placed in the cartons which had been emptied at the first station, and carried down to the end of the line. Once 12 bottles were in the carton, it was taped shut and placed upside down on the pallet... which was actually right-side-up as far as the box label went. Each pallet held four layers of 16 cartons of wine. That's 768 bottles... and each person touched each bottle at least once, sometimes twice! During the entire day 4 pallets were filled... 3,072 bottles of wine!

We had a wonderful time. We were tired, but it was fun to be part of the team. Certainly there are larger operations with more automation, but this system works for this small winery. Will we do it again? Certainly! 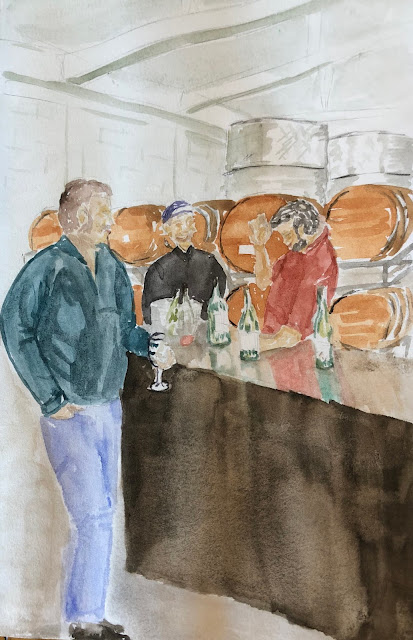 We were camping out in our Airstream trailer with a local California group. Upon returning from an evening event I heard delightful guitar music and singing from an adjacent campsite. It was brutally cold and I didn't want to stay outside, but I thoroughly enjoyed the music as I went back and forth with the dogs.
The next morning our campground neighbor was tidying up on his campsite. I asked if he was the guitar player and singer from the previous night. He indicated that he was. I complemented him, and told him of my enjoyment. Shortly thereafter, we Dreamers left the campground on an adventure.
As we returned, I noticed some Hydrangeas on our picnic table. Along with the flowers there were a few pieces of firewood (and more by our campfire ring), and a hand-labeled CD of music. I felt like I had a secret admirer! 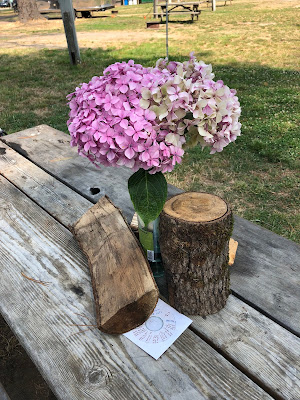 Steff Kayser was my "secret" admirer. He hails from the Seattle area. The CD included his original songs in the same genre as others, such as, "What Am I Doing Hangin' Round", "Doctor My Eyes", and "Desperado".  If you ever have the opportunity to hear Steff sing, and like this genre of music (as I do) I highly recommend you take the time to listen, He's great!

When She is Good

I am enjoying (most of the time) my grandchildren. Alexis turned three in June and Kellan is almost 10 months old. The kids live about 12 miles from us, but traffic turns that into 30 minutes, or more, of travel time.

Alexis goes to preschool programs in the morning 4 days a week. She comes home for lunch, quiet time and then an afternoon of doing whatever toddlers like to do. She stays home on Thursdays, and I have been helping Holly, the other grandmother, with kid care then. I also get to have Kellan on my own for a few hours on most Fridays.

Alexis fails at quiet time. She fails at napping. She even struggles with sleeping at night. Nona Holly and I often wonder what escapades Alexis will have when she is supposed to be quiet or napping. And, in hindsight, it is when she is quiet that she is up to something! Like... the time I came into her room to find all of the bedding removed from her bed... and the mattress moved off as well! 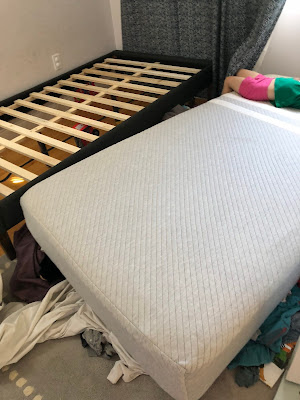 Here are a few more scenes from the summer: 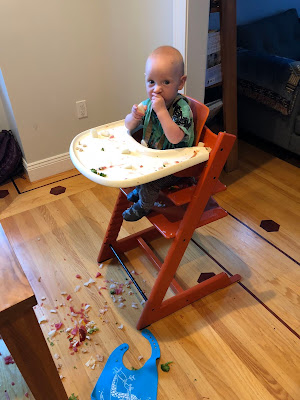 They really need to get a dog!
Clean up would be so much easier! 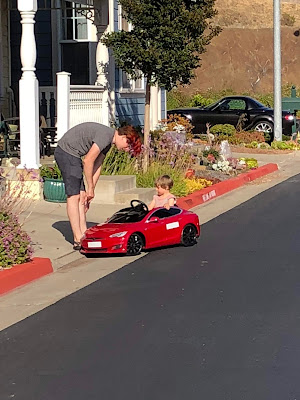 Alexis is not ready for a car of any size!
She couldn't quite coordinate pushing the "gas" pedal, AND steering! 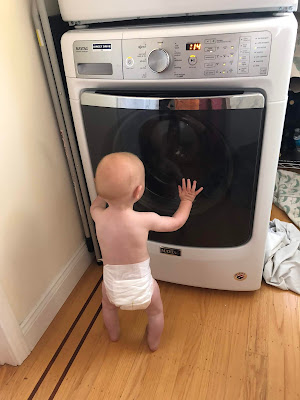 Who needs a TV? 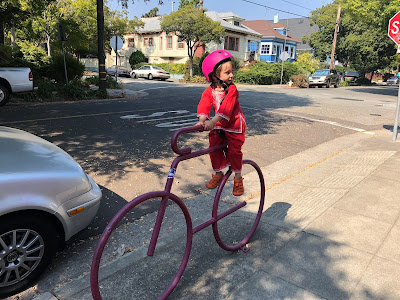 We took a break from scooter riding to pose on a funny bike! 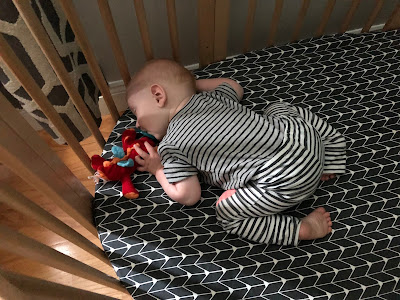 Kellan is a sleeper! 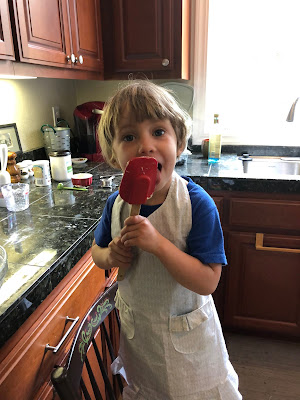 Helping Grammy bake is the best! 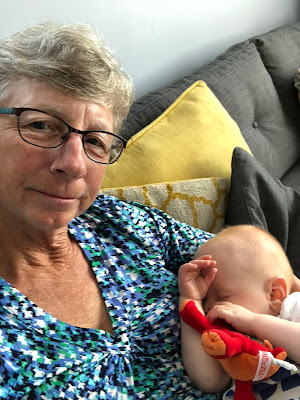 I can handle this part of baby-sitting! 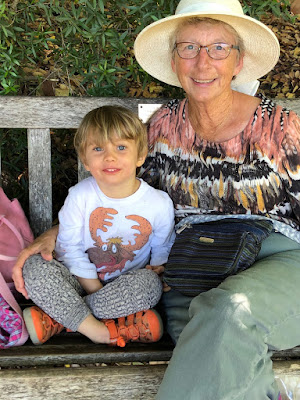 At the Botanic Gardens 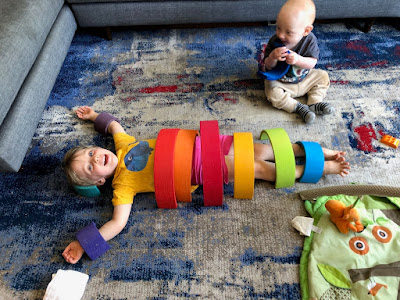 Captured... by the camera, at least.

At the dog beach