So apparently it's not enough to have all kinds of horse events on the property of Grand Oaks, in addition, they recently had an AKC/PALS coursing event. I was vaguely familiar with the term, and had a hazy picture of how it is set up, but I was so totally wrong when it came to the dogs that would be participating. Coursing, following a lure pulled along a course, is typically run by sight hounds. Not so at this event. AKC changed its rules and I think just about every breed was represented, and it looked like each and every dog was having a blast. OK, so maybe I didn't see all breeds, but I did see a lot! As I recall I saw:

For this event all of the dogs had to be AKC registered or PAL registered (Purebred Alternative Listing). The first day the event was a speed event called Fast CAT.

For the FastCAT dogs completed a hundred yard dash individually and received points for their performance based on their size and breed.

The second day a Coursing Ability Test (CAT) was conducted, where dogs had to follow a lure on a course with several turns for 300 or 600 yards. Dogs receive points towards different classifications based on their performance. They receive credit if they follow the lure with enthusiasm and compete the course without interruption within a specified time.


It was interesting to see how different breeds and types handle the challenge. I was very interested in watching the Australian Shepherds, and I was surprised that after a fast start, they settled into a fast run, but held a lot in reserve. It stands to reason, as herding dogs they never know when they will need to add a burst of speed, so they conserve their resources. Several Aussies and other herding breeds ran quite a bit to the side of the lure, as if they wanted to get ahead of it and turn it.

Border Collies tended to run a bit faster. The Boxers all seemed to be very fast and very aggressive, biting at the string and the lures. The Golden Retrievers had fun. Most of them gladly pursued the lure, but not with a great deal of speed. The Corgis looked so darn cute with their "pants" flapping up and down as they gallantly chased the lure. The Great Dane loved the chase, but looked silly gallumphing along with a bouncy stride. Both the Cavalier Spaniels and the Boston Terriers ran swiftly and received applause for their performances.


Only a few dogs gave up on chasing the lure and went galavanting over the hillside. One cute little guy stalked the lure, step by step, and then finally took off after it. Another went after the lure until it made the first turn around the pulley. The dog had to stop and examine the pulley. Quite a few dogs were so intent on chasing the lure on the speed event that they crashed into, or jumped over, the fence when the lure went under it at the end of the course.

It was very interesting to watch the dogs and I itched to grab Tucker and Gypsy and let them have a go. However, we don't have Tucker's papers with us (and he has a bad shoulder and hip...which wouldn't stop him one bit!) and Gypsy has no papers. Maybe someday....

We visited the Naples Botanical Garden on a perfectly lovely winter day in Naples, FL. The garden was begun in 2008 and opened the following year. It is amazing to see how finished the gardens look, given that the oldest sections were planted only 9 years ago, and the most recent garden was just opened to the public. Along with sunshine, soft breezes, beautiful orchids, succulents, palms, exotic shrubs and native plants, the garden was peppered with large origami creations by Kevin Box. Each creation had the perfect setting and backdrop. The garden has a cafeteria with amazing food. We enjoyed a lunch sitting on a patio overlooking the pond, and later picked out Birthday gifts at the shop for Mr. Dreamy: a "pipe" egret, an alligator fern and a pretty pot. 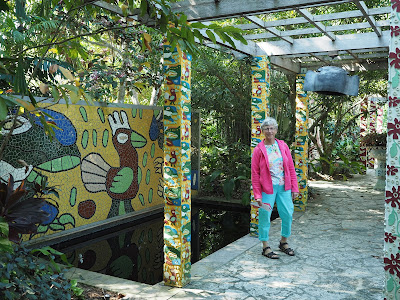 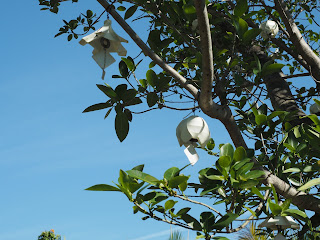 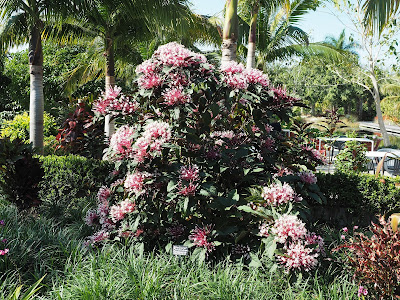 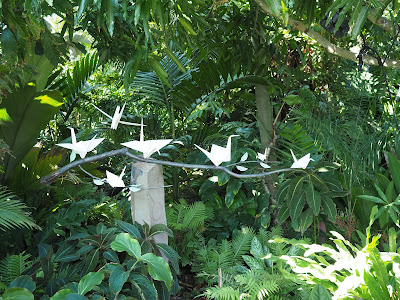 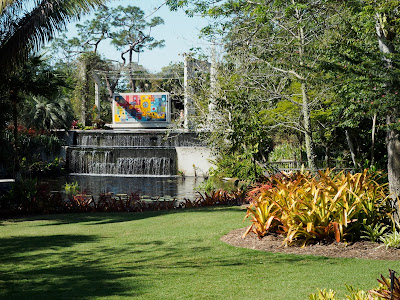 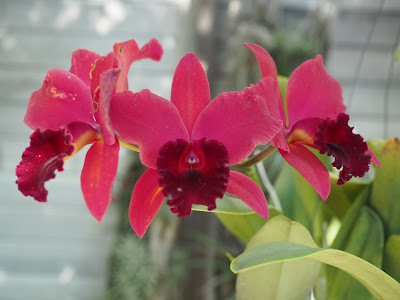 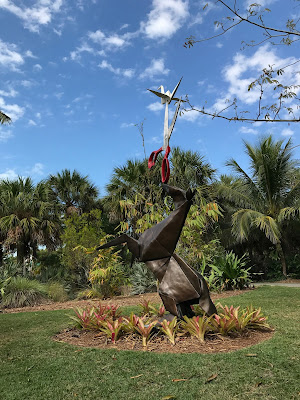 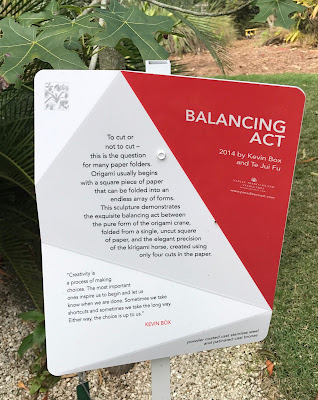 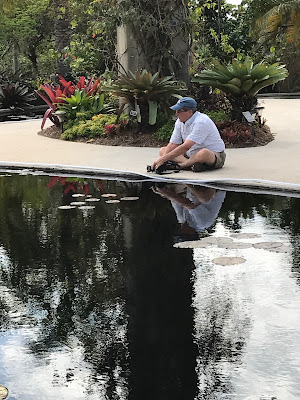 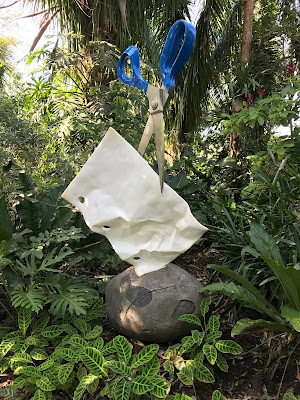 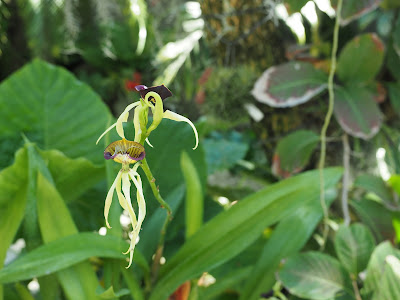 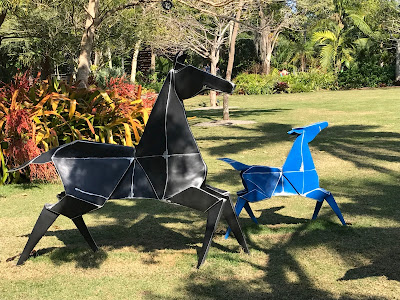 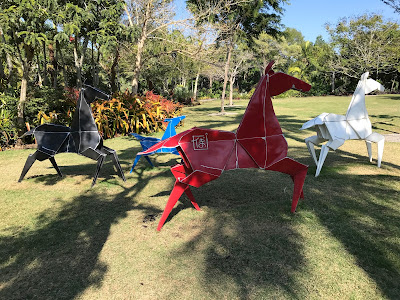 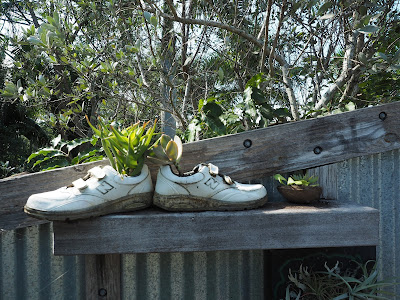 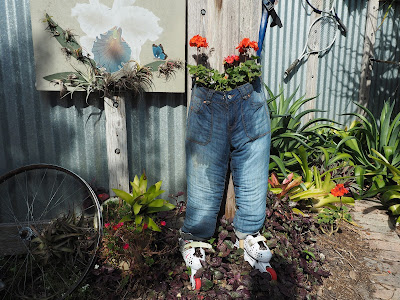 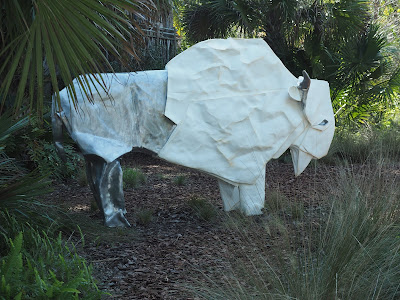 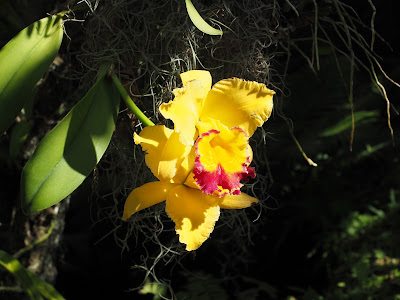 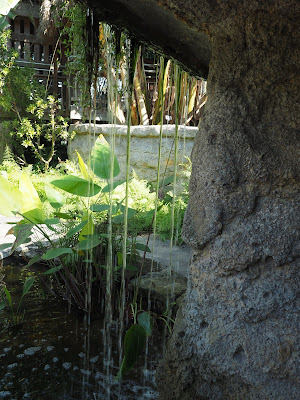 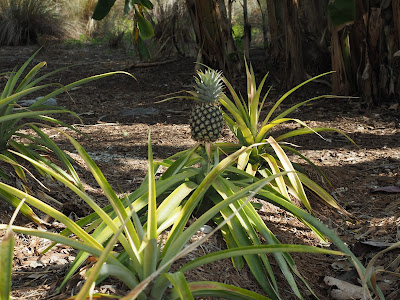 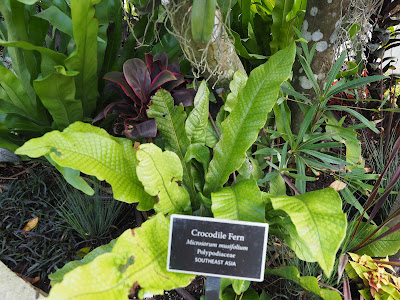 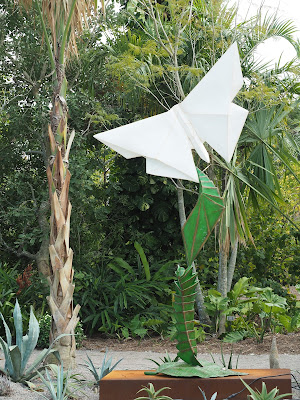 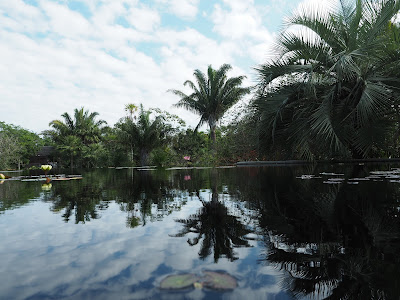 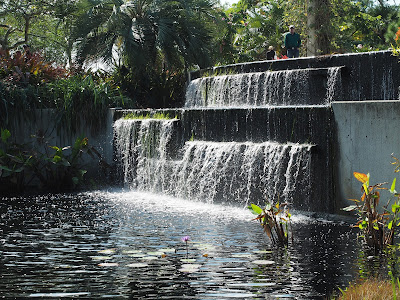 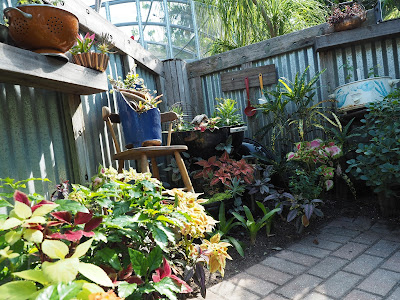 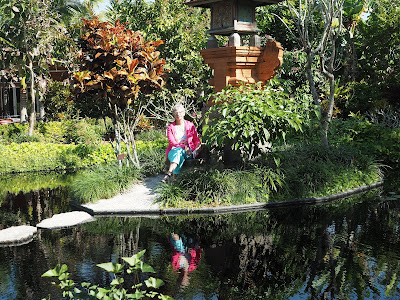 I'm glad you could come along.
We will be going back to the garden, for sure. Now that we have a tiny piece of land, we will use some of the plantings as inspiration for landscaping. I can't wait!

I am surrounded by horses. Big, beautiful horses! We are staying at Grand Oaks RV Resort which is on the grounds of a beautiful equestrian facility. There are arenas and horse paddocks scattered throughout the idyllic green hills peppered with majestic oak trees. Folks can rent cottages of different sizes and bring their horses with them so they can train all winter. If they have an RV, they can stay at the "resort" and stable their horses on the property. There are a lot of carriage horses, including Bud and Weiser, two lovely Clydesdales who pull a wagon for tours of the property. We see horses pulling carriages in front or behind the motorhome on a daily basis. What fun to hear the clip-clop of hooves as a pair of horses trot by! (I was a bystander at a recent clinic and learned that two draft horses are called a team, and two lighter breed horses pulling a wagon are called a pair. If you have four carriage horses they are called a team because they pull as much as the two draft horses. Interesting!) It is even more awesome when a four-in-hand (two pair hitched one in front of the other) of high-stepping Friesians trot past the motorhome! Tucker and Gypsy have been on their best behavior. They haven't barked as the carriages have gone by, and on our walks they enjoy sniffing noses with curious horses that come up to the paddock fences as we walk by. However, Gypsy did take exception to one of the Percherons and snapped at the air trying to drive him back when she felt that the horse was moving in on her space. But, can you blame her? The Percheron's head is every bit as big as Gypsy! The facility is used for clinics and horse shows, as well as other outdoor events. While we have been here they have had a pleasure carriage driving show, a Gypsy Vanner Society evaluation clinic and the Gala of Royal Horses. This weekend they are having a dog coursing event and next weekend there will be a hunter/jumper show. Perhaps I've gotten my fill of horses for the time being, but then again, maybe not!


Here are a few of the sights I've seen in the past two weeks:

We called a mobile repair tech and he arrived at 9:30 PM one night. He pointed his flashlight here and there and located the leak.... perhaps I should say "leaks"! Our motorhome was worse than an old lady. She was leaking fluids from multiple orifices, and she wasn't even sneezing! (Only those of you over a certain age might understand that comment.) The techie went on his way, promising to come back later to put things back to rights.

A week later he returned with a buddy to attack the issue. They crawled under the motorhome and using suction glass carriers that Mr. Dreamy purchased, they lifted the access panel to the engine. They tightened a clamp that was allowing antifreeze to leak, an oil filter that was not tightened properly when our oil was changed, and another clamp at a fuel filter. 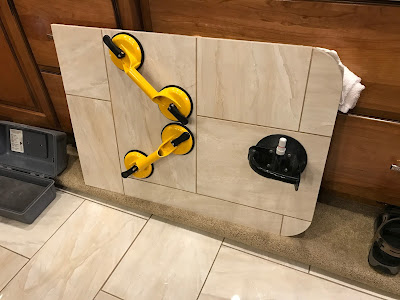 Knock on wood, all is dry!