Getting to Heaven by way of Hell

Surely this must be Hell, I thought, as I peered through the windshield, smeared by pouring rain. This trip is Hell. This trip is insane! But, it is too late to go back!
I booked a flight to Kansas City months ago. My BFF was coming in to see her daughter perform in an opera. The daughter who was my "child from another mother".  We talked about the trip for weeks. Couldn't wait to see each other. Couldn't wait to see her daughter perform. Couldn't wait to take a side trip to the Missouri Star Quilt Company. Then..... cue foreboding music... the first named storm of the season loomed over the western mountains. Winter storm Ajax was on his way. He was coming my way and everyone was getting ready to batten down the hatches and hunker inside their homes for a few days. But wait. I have plane reservations. I have hotel reservations. I have a car reserved in Kansas City. I have to go see my girl perform... and catch up with her mom... and visit a quilt shop (not just 'a' quilt shop, but the quilt shop of all quilt shops!). This can't happen.
I received a notice that my flight had been cancelled. It was supposed to fly out on the morning of the big storm. There were no flights the next day. The performance would be over after that. No sense of going to Kansas City after the fact! My hotel could be cancelled, but I'd forfeit one night's fee. The car... wait, why not just take my car and go? The storm wasn't due to strike until 2 PM. It was around noon. My son, Mr. Dreamy and I, talked about the options. Son said he'd love to go with me. What the heck, we'd have an adventure.
And adventure it was! We were on our way out the driveway as the snow began to fall. Once we turned east, the snow dissipated, and we began what turned into a nightmarish drive. We drove through some spates of snow. Then sunshine. Then rain. Then wind. Then rain. Then slush. Then hail. Then more wind. Tumbleweeds were racing across the road in front of us. Lots of tumbleweeds. Trucks were pulling over. Too windy. Then the wind died down. The rain came. And went. Night fell. We were treated to an incredible pyrotechnic display by Mother Nature. In an arc, 180 degrees around us, there were so many lightning flashes the skies were alight. We were driving towards it. Hmmmm, pretty, but maybe not so much fun to observe from close up! Then the radio alerts for tornado watches and warnings began. I was frustrated that the weather stations reported sightings of tornadoes in certain counties around us. I don't know the counties. I wish they would at least mention a town. I suppose mentioning a mile marker on the interstates would be too much to ask! We could access a weather map. There were tornado cells all around us. We drove through one. It was a bit tense in the car as we wondered whether a funnel cloud was bearing down on us. Son peered over his shoulder, watching the sky as the lightening lit up the night. I drove on.
We left the bands of stormy weather behind us. The release of tension from the storm, the monotony of the drive, and the late hour made the last half of the 9 1/2 hour drive seem to take forever. Were it not for a good audio book....
Good audio book? Well, yes... and no! We were listening to "The Martian". How appropriate. Here we were, driving through hell and getting sucked into a story of living through hell on Mars. Was there much difference?
Finally, we arrived at our hotel.
The rest of the trip made up for the challenging journey.

We visited museums and ate at interesting restaurants. 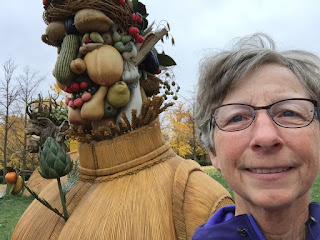 We attended the opera, The Magic Flute, and enjoyed seeing my friend's daughter in the role of Papagena. 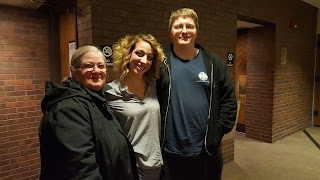 My BFF, Papagena (without her incredible costume)
and my son.


And, the highlight of the trip....
We took a side trip to the Missouri Star Quilt Company.
What a place! This is quilters' heaven! 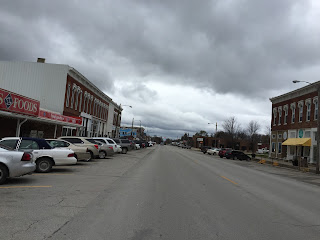 Hamilton, MO
The town has been given new life with the success of
the Missouri Star Quilt Company. The company has refurbished buildings,
opened stores in multiple locations, and created a string of jobs for local folks. 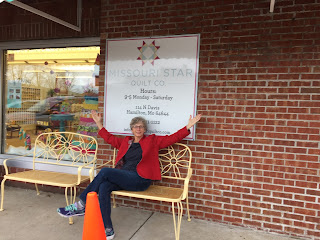 Dreaming isn't dreaming!
She really is sitting outside one of the MSQC shops!
There are 9 shops that comprise the MSQC.
Several are focused on specific lines of fabric,
such as vintage prints, licensed characters or solid prints.
A "Man Cave" is under construction. They will have
lounge chairs and TV for the guys! 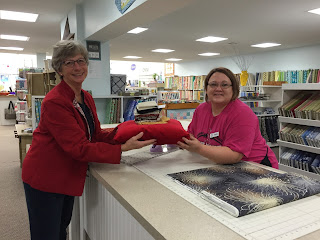 When one orders something from the online shop, a cute acknowledgement comes
in an email. The email explains that the workers have carefully cut your order and
it was placed on a red pillow, while being carried to the shipping department.

Of course, I had to ask where the red pillow was.
Stella found one and used it to "deliver" my purchases!

The MSQC is a family affair. It was begun in 2008 when the family was struggling. The children suggested that Jenny turn her quilting prowess into a business. She began using a long arm machine to do the quilting for people who didn't have a machine that could do the quilting. She also began making 'how to" videos that were put on YouTube. Things grew from there. More video tutorials. Books. Fabric for sale... as they say, the rest was history!

When we came into one of the shops, there was a life-size cardboard cutout of the quilting maven. We asked the cashier if she could take a picture of us with Jenny, as we pointed to the cardboard cutout. Little did we know, but the real Jenny was in the back. She was more than happy to chat with us and get a picture taken. 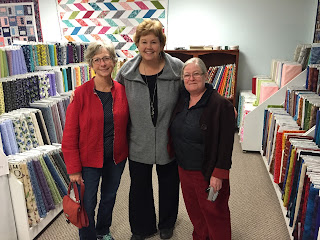 So, I went through hell, and found my own sort of heaven! It was a wonderful trip, but I don't know that I want to make that drive again, anytime soon!
at November 23, 2015 6 comments: