A Donkey Saves the Day

A donkey named Ellie apparently led her herd of four draft horses and another donkey to a lush green meadow in an effort to stay safe from the High Park fire in Colorado. When help arrived, the donkey, with singed whiskers, walked up to the rescuer and put her head into the man's chest.

This is just one example of why so many people who know and love donkeys are trying to stop the practice of donkey roping. Donkeys are highly intelligent, sensitive animals. Being shocked with electric prods, chased by cowboys on horses, roped head and heels and brought down, is cruel. The body structure of a donkey is different from that of a cow,  so donkeys can more easily suffer physical harm, as well as the emotional trauma.

I have been following Morning Bray Farm's blog for a few years. Morning Bray Farm adopted rescued Patrick last year. He was used for roping. You can read Patrick's story here. Patrick recently sent a message to the folks organizing the roping event. 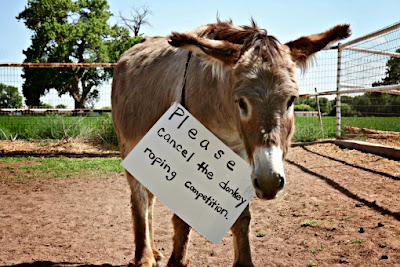 What are your feelings about this type of event? It's something I had never heard of before I 'met' Patrick. It's probably something I would have considered as accepted practice. I mean, they rope calves, don't they? But then I learned more about donkeys. I believe that education is the key.

We recently went to the open house of the Dumb Friends Animal League Harmony Equine Center. Terry, at Moondance Ranch, put up an excellent post about it here. The equine center takes custody of abused animals that have been removed from their homes as a result of legal proceedings. We learned from a criminal investigator with the SPCA that the majority of abuse cases he sees are a result of ignorance on the part of the owners. In fact, 90% of the equines that come into custody are returned after a period of owner education. That seemed like a lot huge to me!

Considering those statistics, I began to wonder how many rodeo promoters are educated about the effects of donkey roping? What about the cowboys who rope them? How many audience members recognize this as cruelty? My guess is, that like the horse owners mentioned above, the majority just don't really know. The pressure from those who understand donkeys has resulted in the publication of educational pieces. Here is an excellent article that explains why the practice of donkey roping is abhorrent.

And you? I'm hoping that, like me, now you know! If you have it in your heart, let other people become informed, too. Share this information with your friends. Let others know how you feel.

Today is a red letter day. I have heard that the donkey roping competition scheduled in Van Horn, Texas for this coming Saturday has been cancelled. The donkey lovers have won this battle, but the war wages on. Please continue to talk to your friends and let them know about this practice and the interest among so many in seeing all animals treated humanely.