I'm not a shy person... generally. Oh, OK, sometimes I'm a bit reserved. But, have you ever noticed that when you get with a friend, a really good friend, you gain strength and sometimes do things you might not have done by yourself? That's what happened in this instance.

Many years ago I read about a very small town that had a very small Christmas parade. It was so small that the parade marched up the main street and then came back again. One of the entries in this town's parade was a drill team. It was comprised of a bunch of ladies that carried drills. How funny! How perfectly it fit our own quirky little town that prided itself in being different! For a while we even had a newspaper called  "The Bluffton Eccentric". But, back to the story...

I just never got the drill team off the ground until I met that special friend who was willing to stand by my side and do something silly in front of half the people in the town. The other half of the population was in the parade! Remember, I said it was a small town! So, the Bluffton Ladies Drill Team was born. 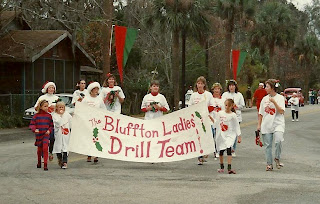 I found a few friends who were willing to be a little bit kooky. We borrowed drills from our boyfriends or hubbies. One lady even bought one just for herself! I had T-shirts made, and my best friend and I worked up a routine; oh... and it was fine if you weren't in step. After all, it was hard enough to walk, kinda do the steps, throw candy.... and laugh!
Our silly routine became a town favorite. We were often pictured in local papers, like the photo below. There I am, in the front and my best friend, my courage, is behind me on my left. I now have some insight into how celebs feel with paparazzi's lenses in their faces. I became used to ignoring a few photographers trying to capture the story as they marched backwards, trying to nab the perfect shot of the team in action! 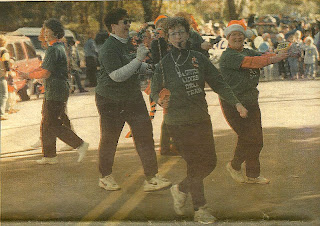 We marched in the parade for 17 years, and even did a guest appearance at a nearby St. Patrick's Day Parade. We developed our own rules and procedures, with the first rule being that we must have fun! One year, in the spirit of fun, we jumped in the back of hubby's truck and were chauffeured back to the beginning of the parade, and marched the route again! 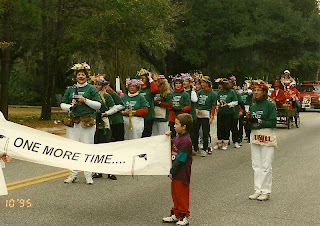 I moved away from Bluffton just over four years ago. Before leaving I officially passed the drill to another leader, and the Drill Team marches on. It's fun to know that I left a legacy in our former home town.
at December 05, 2011