Rode Hard and Put Up Wet

GunDiva at Tales from the Trail is having a give-away contest. One lucky reader/writer can win Julie Goodnight's Guide to Great Trail Riding. The best part of this is that one of GunDiva's experiences with her wonderful horse Estes is included in the book! GunDiva also had a chance to participate in the filming of some episodes of Horse Master. How cool is that?!
I'm hoping that entries aren't judged by the horror factor... as my tales from the trail aren't terrifying (thank Heavens!) but I have had my share of misadventures!
This is Apple. 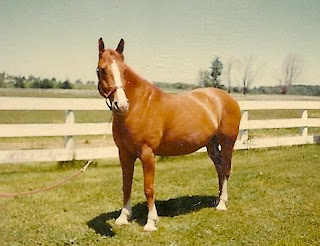 Apple and I shared many misadventures together.
He was a sweet, willing guy that carried me safely over
cross-country courses and on many a fox hunt
way back when, when I was just a high school kid.
Our first misadventure began the day I bought him. Actually, I shared this one with Apple's former owner, for she decided to take Apple on one last trail ride while I was in school. A large tree had fallen across the trail and Apple's former owner was hesitant to jump it. She dismounted to lead Apple through the bushes and shrubs along the side of the trail to get around the branches of the tree. She wasn't sure whether a branch smacked Apple, or whether he got stung by a bee, but he pulled back suddenly, tearing the reins from her hand and took off. She tried to follow his trail but didn't succeed and ended up hiking back to the barn, figuring Apple would be waiting to be let into his stall. However, there was no sign of my horse. He was gone. I had just delivered a check for a horse that was nowhere to be found! Now, that's horrifying! You can imagine the emotions - for the previous owner and for me. We went back to the park where Apple and she had parted ways. We walked the trails. We called local stables. We stopped at barns near the park. Finally, on the second day of being AWOL, we found a large, chestnut horse grazing peacefully in a pasture among a herd of dairy cows. It was my large chestnut horse! The farmer had found my horse in his field. He removed Apple's tack and left him in the pasture, figuring sooner or later someone would drive by and recognize the horse.

Not too long after the 'disappearing horse act' I went out for a ride on an unseasonably warm winter day. My calm horse was transformed into a wild steed as he pranced down the road, with knee action that would rival that of the best Hackney! Then, he saw it.... and we were off, galloping down the middle of the road! If you have ever had the inclination to gallop on a paved road with a shod horse, it's just like my getting out on the ice with Kristi Yamaguchi, or my trying to walk across the wet, clay paddock in my smooth-bottomed, worn barn shoes - my legs and arms do that cartoonish pinwheel stuff as I strive to stay upright. And, so it was with Apple. He galloped, and scrabbled, and slipped and slid all in an effort to escape the predator... a Great Dane, who was quietly minding his own business up the hill from the road. He didn't bark, he didn't  give chase, in fact, he didn't even come any closer. But, my horse wasn't waiting to see if he would as he knew that dog could take him in one bite! Apple awkwardly put some distance between us, saving us from certain death by fangs, and somehow managing not to crash and burn on the road. We galloped a fair distance before I could stop my charging steed. By then, he had worked himself into a lather. We returned to the barn where I set about trying to cool out and dry my dripping horse before the chill of the evening set in. It was at that point that I gained some insight into my mild-mannered horse's actions. The stable man came by to inquire about my ride. He commented on how much better a rider I was than Apple's previous owner, and explained that he had increased Apple's grain. No wonder I felt like I had been sitting on a lit rocket. Even in the height of fox hunting season Apple only required a handful of grain, not the large scoop he had been enjoying twice a day!

The stable was about 3 miles from a beautiful park with great trails. I would hack over from the stable to ride there at least once a week. One time I had just arrived at the park when the skies opened up. Apple and I galloped along the trail, through the cover of the trees, until we came to a picnic area. We took shelter under a covered eating area to wait out the storm. The storm outlasted our patience. The rain just wasn't letting up so we started for the barn. As we headed out into the storm I'm sure Apple had visions of his stall filled with piles of dry, fluffy straw.  He was anxious to get home and lit out in a nice, ground-covering trot. However, herein lay the problem; as we went along, Apple was intently watching where we were going. This meant that his ears were forward. Did you notice how large his ears were? They made perfect rain scoops! It makes my eyes cross to imagine the feeling of cold drops of water splashing into my ears. Apple would put up with the rain drops for a bit, then he would slide to a stop and shake, beginning with his head and working down to the tip of the tail, almost shaking me out of the soggy saddle. As we continued on our way, he'd try to flop his ears to the side, but soon they'd point forward again. He'd stop and shake. My silly horse never could figure how to move along without having to suffer from raindrops collecting in his ears!

Maybe it wasn't just the discomfort of raindrops in the ears that Apple objected to, because, come to think of it, he wasn't thrilled with walking through water, either. We had a few misadventures on cross-country courses and hacks through the park where we would have differing opinions about a water hazard. I was eliminated on cross-country once because Apple refused to step his dainty hooves into the water. We did a very interesting dance at the edge of the water, but no way, no how, was he going to get wet! That was unacceptable! Working through this issue became our main focus. I went out of my way to find water. One day the trail I was following entered a huge puddle, or perhaps a small lake! We had recently had some warm weather that had melted a good bit of snow, and on top of that we had had a spell of rainy weather. So it wasn't unexpected that there were areas where we were used to riding that were now under water. Apple, with a little encouragement, followed the trail into the water. We plopped through the water as it rose higher up his legs. First to his knees, then to his elbows and soon, my sweet horse was belly deep in water. He was handling this like a champ. Then he stopped. I urged him forward. Nope. We weren't going that way. I asked him to turn to the right. Nope. Not that way, either. Apple wouldn't budge. Not forward, left, right or backwards. Apple stood his ground in stubborn horse-style passive resistance! I couldn't figure it out. We just stood there, with my toes just above the water that lapped over Apple's belly. I again asked him to go forward and he tried to take a step. I realized that he wasn't being contrary.  He wasn't moving forward because his leg was being held fast under the water. Apple was caught by something, perhaps the lake-ness monster? I looked at the expanse of water surround me. I couldn't come up with any alternative for getting out of this situation other than dismounting and sliding into the cold water. Once I got in the water, I slid my hand down Apple's leg. My hand reached midway down his canon bone and I couldn't feel anything that would impede his progress. I had no choice but to participate in some impromptu, unprepared-for, snorkeling without a snorkel. I had to plunge my head into the water as I followed my hand down his leg. I discovered a piece of wire from an old submerged fence around Apple's pastern. It took several dives to release his leg. He stood patiently as I repeatedly plunged into the water to work the wire with both hands, and came up to gulp some fresh air. Finally he was freed. I mounted, dripping wet, for a cold, soggy ride back to the barn.