There was hay in Pippin's stall in the morning.
Unheard of, absurd!
Hay in a Haflinger's stall after twelve hours?
Unthinkable!
Who do you think you are?
A Thoroughbred?
Who do you think they are?
Arabians?*
Haflingers NEVER leave hay just standing around. They eat it all! But a few days before this one of the horses (they aren't talking) managed to pull down a few bales of hay from a stack in their run-in shed. The house sitter isn't quite sure how they did it - nor am I. The hay is stored about two feet away from fence panels. They'd have to climb up the fence (and it wasn't bent), push it in (it was still in place) or reach over the fence (with little Haflinger necks...are you kidding?!) Hmmm...maybe they enlisted the help of the pigeons!
I'm still not sure quite how they did it... but there was extra hay hanging around. My horses evidently ate, and ate, and ate some more. They were in Haflinger heaven! The house sitter would push it out of the way, and they would manage to retrieve it. By the time I got home they were either filled to the brim, or perhaps their jaws were tired from chewing! They weren't overly interested in more hay! This is probably a once in a lifetime experience!
This brings to mind a pet peeve of mine....
Peeve #328: Listing 'flakes' of hay in a feeding chart. A flake, IMHO, is not an accurate measure of feed!
Scene(sic) at a local barn: 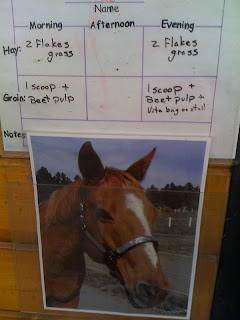 I recommend that horse owners weigh the hay they feed their horses. If horses are being fed by different individuals, I think weight is a must.  I've had bales of hay where a flake weighs under 3 pounds and bales where a flake weighs 7.5 pounds. That's a huge difference! 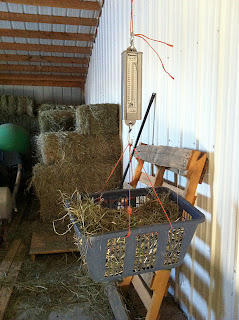 I weigh hay daily, either using the basket
or hanging their NibbleNets on the scale.
As a baseline horses should eat approximately 1 1/2% - 2% of their weight in roughage daily. That translates to about 16 pounds for my boys...each! This needs to be adjusted for each horse based on their level of fitness, their usage, other feed they receive and their access to pasture.  Over time, owners have a good feeling for what amount works for their horses, but in a stable, where different folks might be feeding the horses, they may not get the appropriate amount.
Despite getting on my soapbox about feeding 'flakes' of hay, I couldn't help but chuckle at this little fella's feed chart! 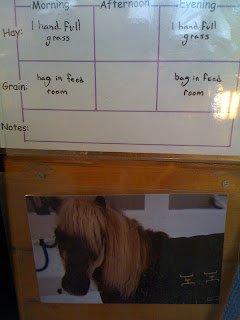 Oh, you poor little thing.
I know how you feel. I'm an 'easy keeper' too!
*This was an attempt to play off of Tevye's monologue from "Fiddler on the Roof"....  just in case you didn't catch the subtlety of it!
at December 30, 2011