I watched the helicopters fly over the mountains earlier in the day. I knew that foresters in the copters were pulling levers to drop small incendiary devices every 20 feet or so. Each fire smolders, then meets with the others, and then they are all naturally extinguished. 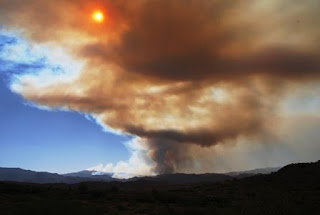 Observing the fires, I knew people would be concerned that the Forest Service was purposely setting fires in the mountains. ‘Smoky the Bear’ has done his job, but people need to be reeducated about new practices. Series of small fires will clear the underbrush and eliminate the threat of a huge forest fire.

This week Jenny provided the picture and suggested that we use 100 words to address this image. Click on the Saturday Centus button above to visit other responses.

This is fiction. However it is based on a real-life experience I had many years ago. A friend of mine was a forester and he would occasionally be required to sit in a helicopter and drop ping-pong balls that had been injected with a catalyst that would cause them to burst into flame. In order to prevent large forest fires, the forest service would use the ping-pong balls to set numerous small fires in a controlled burn. Sadly, even the controlled burns can get out of control, as evidenced by the North Fork fire in Colorado that burned over 4000 acres. That fire had been extinguished, but a hot spot was fanned into flames by high winds several days after the burn. The Governor declared that there would be no more controlled burning. Sigh. Yes, that might eliminate the chance of another fire of this sort, but when a fire does begin in the future, how much worse will it be?!