Somehow my Hubby and I volunteered
to help at a sheep dog trial this weekend.
Yesterday was all about the sheep: 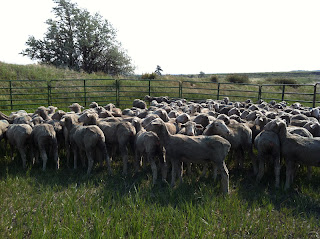 150 of them.... give or take a few!
This herd lives in the mountains near Steamboat Springs.
They are basically wild, only handled for shearing
and annual veterinary care. 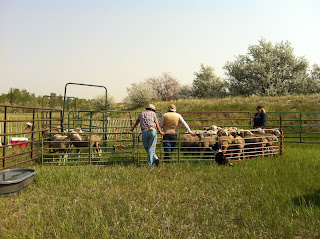 The sheep were penned in a large round pen.
Neither of us have ever handled sheep. We learned a lot!
We learned to slowly move the sheep so we could
gather some sheep in a smaller holding area. 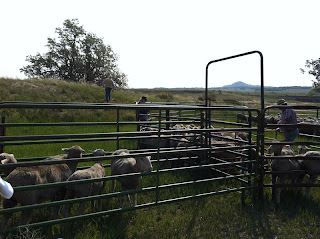 From there, we learned to move
four sheep into each of two chutes. 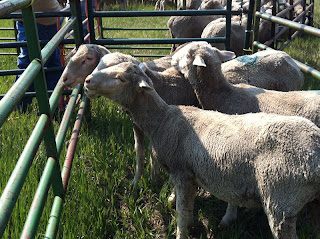 This group of four are on deck for being moved to
the 'exhaust pen' by a sheep dog. 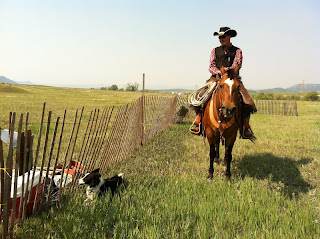 Lexie waits for the sheep to be released so she can help move them.
Lexie isn't 'on trial'.
She's just helping to get the sheep
in the right location and keep them there
until the dog on trial comes to pick them up. 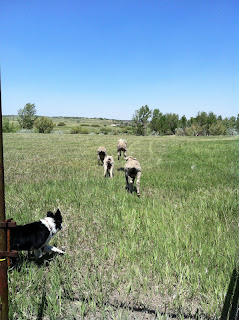 The sheep bound out of the gate.
Sometimes they would leap over imaginary obstacles!
That always made me laugh! 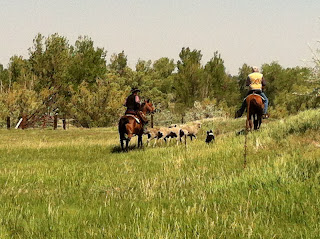 Two fellas on horseback,
and Lexie,
slowly move each group to an area
where the sheep dog will be sent
by the handler to bring them in. 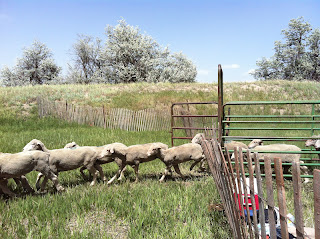 At the end of the day the sheep that
weren't used in the trial exit the pen.
They'll be able to graze in the pasture until they
are taken in for the night.
They'll be moved back out for some grazing in the morning
before they go to work for the sheep dog trials.
at May 27, 2012