I love old towns like Park City. They just ooze history. I can get lost in imagining life in earlier times. 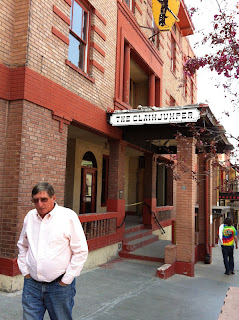 Park City was a silver mining town beginning in the late 1800's. Virtually none of the original buildings still stand as most of the city was destroyed by a fire in 1898. Fire swept through the town again in 1912. The Claimjumper Hotel was a victim of each of the fires. According to the historical plaque on the building, the people of Park City recognized the need for a more fire-retardant hotel and funds were raised by the Henry Spriggs Commercial Club to build this brick and masonry structure. It opened as the New Park Hotel in November, 1913. It was built at a cost of $22,455. The New Park Hotel was described as a "beautiful and commodious hostelry" with the dining room decorated in patriotic red, white and blue. All meals including Sunday dinner, were 50c each. Guest lists, which were published weekly in the 'Park Record', indicated that business was flourishing. Apparently the hotel is being refurbished inside and will open as a hotel again at some point in the future.

I like how the buildings have been constructed to fit into and around the hillsides.  It might make for interesting layouts of the interior. 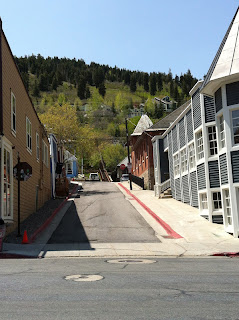 In some areas of town there are alleyways with steep stairs heading up or down,
from one street to the next. 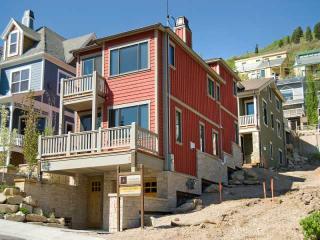 Many of the cute little houses are bigger than they look,
even though there isn't much of a lot.
This one is 2100 sq ft and has 4 bedrooms.
It's on the market for $1,000,000.
Location, location, location! There is a town lift to take skiers up to the top of the first ski slopes.
You can just make out the wires of the lift behind this double row of homes.
There are additional ski slopes on the back side,
as well as elsewhere up and down the valley. 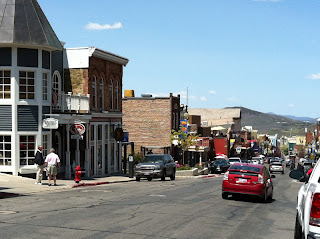 Main Street is about a mile long.
It has numerous restaurants, galleries and shops.
The street is on a hill.
You can begin at the top...
and take the free trolley back up if you don't care to hike! 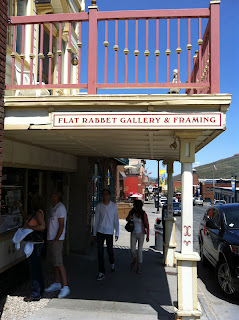 I took this picture of the art gallery for Doc.
I thought he might appreciate the idea that
someone else likes pancake rodents!!
(However, I guess rabbits, no matter their spelling,
are not considered to be rodents!) 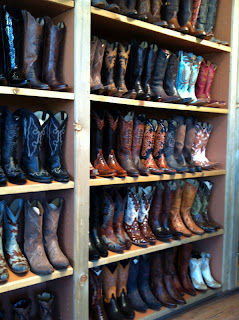 I'm not a huge fan of wearing cowboy boots.
They pinch my toes.
However, I was impressed by the variety
offered in this cowboy supply shop. 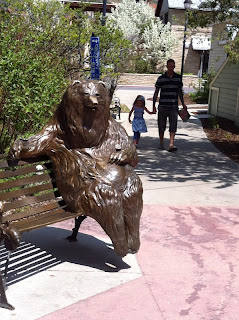 Meet Franz, the Bear. He is a Park City icon.
However, I would not sit next to him to have my
picture taken. His bronze bench was a real hot seat! 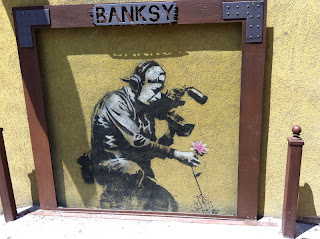 Banksy is a world-renowned graffiti artist.
He decorated an alley wall with this art
during the Sundance Film Festival in 2010.

Speaking of the Sundance Film Festival...
Do you know what film was voted the
US Documentary Audience Award winner in 2011?

That's a hint about something to come....