A Matter of Perspective

Do you recall anything from the Salt Lake City Olympics? I'll have to admit, those memories, the few that were on the shelf in my brain were pretty dusty. But, as we have been in the area some images have begun to come back in focus. Certainly, visiting the Olympic Park was a great help. Several times, as we walked around the museum, or listened to our tour guide, Carl Roepke, Luger and then sports commentator, things came back to the forefront and I got caught up in the drama all over again! 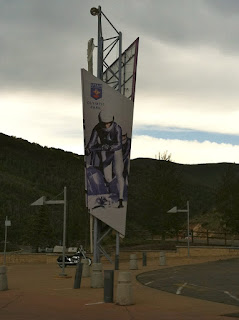 The Utah Olympic Park near Park City was constructed for the Nordic ski jumping, luge, bobsled and skeleton sled competitions. The park is still used, year-round for training, and visitors have an opportunity to ride in a bobsled, fly down the hill on zip-lines, race down an aluminum alpine sled track or test their coordination in doing some freestyle ski jumping into a pool. Luckily sadly those venues weren't open for the season on the day of our visit! It was hard to visualize each area as it would have been during the games, with hundreds of spectators, media personnel and athletes milling around.

There is a wonderful museum that chronicles the 2002 Olympics, as well as another area that looks at skiing through the ages. I was enthralled by the puppets that were used in the opening ceremonies. As I saw them hanging from the ceiling, reaching down below my feet to the first floor, I recalled seeing them in the ceremony, with their articulated joints making them come to life as they seemingly galloped through the air, offering a tribute to the ancient history of the West. Along with the horse, the museum had puppets of the bison, beaver and eagle. 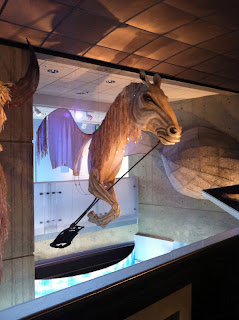 We went on a brief tour of the facility.
We had a chance to see the bobsled/luge/skeleton sled run from near... 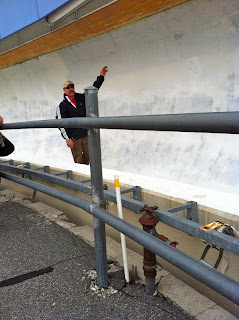 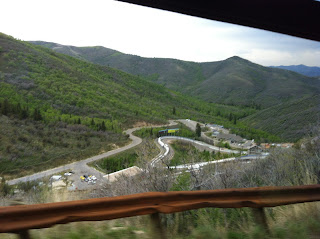 We just happened to be at the starting point for the luge
when the wheeled sled began a trip
down the track with some PR folks. 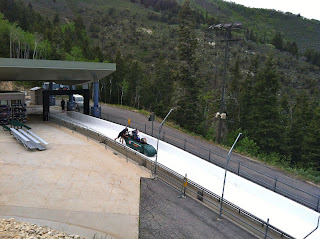 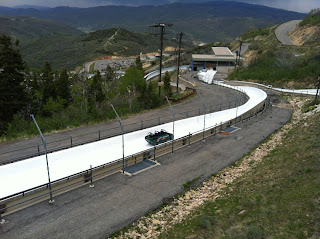 Do you see them in the middle of the curve below?
They are reaching speeds of 70+ mph
and hitting 5 G's.
Carl, a former Olympic luger, explained that he had
taken a few of the bobsled rides down this track.
He decided the wear and tear on his body was too much!
I guess he's reached the age of mortal reasoning! 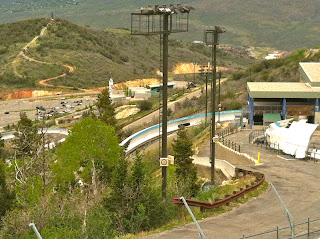 We had a chance to see a few of the Nordic ski jumps from the bottom: 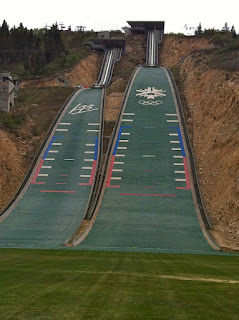 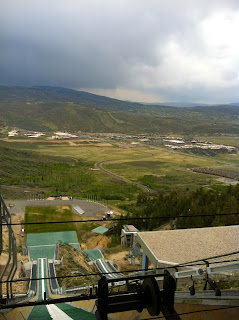 In order to get a decent perspective on this...
Looking above,
do you see the little white square on the left,
about 2/3 of the way down the picture?
(Just above the green plastic runout area.)
That's a Ford Econoline van!
Oh, and looking to the right,
in the middle of the picture.
Do you see the developed area?
Remember that.
There will be a quiz!

The green part of the jump is covered with long plastic grass.
The white "stripe" in the middle of the upper half
is a formed, plastic track.
The skis fit in the track.
Even when there is snow on the jump
a track is carved for the skis to ride in.
Oh, and on the steep landing area
they have to put what looks like large cargo nets
over the green 'grass' to keep the snow from sliding off. 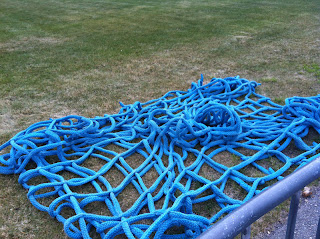 For summer training water runs down the jumps
which adds a bit of slickness to the plastic. 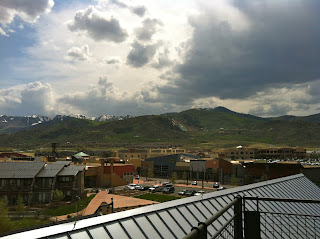 And, now for the quiz....
Do you remember the developed area I pointed out?
Then, you passed the quiz!

This picture is taken from that area.
I am in an observation tower
at the Swaner EcoCenter.
In the distance, almost in the center of the picture,
you can see the two large Nordic jumps
I showed you in the other pictures.
In the foreground of the picture is
Newpark, "The Newer Side of Park City"
On the left and in the background you can see some condos.
In the center are some shops.
There are business buildings and rec centers
out of the picture to the right.

Hubby and I went across to the developed area
after leaving the Olympic Park to find a restaurant.
We found so much more!
This is a beautifully planned
Live-Work-Play-Shop-Dine-Stay community.
It's a community of the future and we think
it's the way communities should be built!

To us, it's a matter of perspective!