In our local area most horse events for this weekend have been canceled or postponed. One of my friend's veterinarians has recommended that everyone keep their horses at home for at least 21 days.
Sign on the gate of a stable near my house! 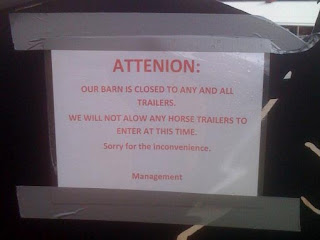 The Colorado Department of Agriculture has the following posted, as of 5/19 at 1:00 PM.
In addition to the confirmed cases in California, Colorado, Canada and Washington, authorities are now saying that there have been more cases in  Idaho, New Mexico, Arizona, Oregon and Utah.
The clinical signs typically start with a fever of 102 degrees Fahrenheit or higher. Other symptoms include:

This virus can also cause late term abortions or chronic health problems for foals that were infected in utero.
The Colorado Department of Agriculture has also said that camelids, which are alpacas, llamas and camels, are susceptible to EHV-1, but there have been no cases related to this outbreak.
Check the links on my sidebar for more information.
at May 19, 2011