We'll Leave the Light On

This post is a story from the past. It's a story that involves my horse, Marmalade. The story began years before I bought her and although the events are true, they have been somewhat fictionalized as I was not there in person. I was simply there for the retelling of the story and,  Big Red really did save the day! 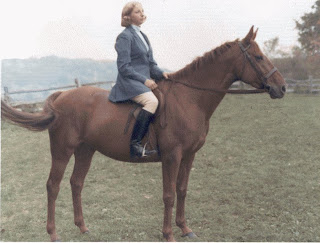 Marmalade - 1970
Big Red knew that something was wrong. He was like that. He was tuned in to the normal noises and normal routines of the small barn. But tonight he could hear the labored breathing. He could smell the blood. Something was not right. So, what's a horse to do? Big Red stretched his head over the stall door and deftly flicked the light switch. The lights ought to alert the people of the house.

It was 4:30 in the morning. Aunt Jane awoke to see the barn lights glowing. She toyed with the idea of rolling over to go back to sleep, but in the back of her mind there was a growing pool of uneasiness. Big Red had turned the barn lights on in the past, and always for good reason. She rolled out of bed, pulled on her barn boots and, still half asleep, trudged to the barn in the pre-dawn of Easter Sunday.

Marmalade had been experiencing waves of pain for hours. Just as the pain subsided, another wave would creep in and grow to a crescendo. The muscles of her abdomen tightened - a constricting band that made it difficult to breathe. She couldn't stand. She crumpled to the ground, thrashing with the onset of another round of pain. The tightness forced the air out of her lungs with a loud, keening sound.

As she entered the barn, Aunt Jane took note of Big Red's uneasiness. She stopped to rub his neck and he lowered his head as he greeted her with a low rumble as if to say, "I'm so glad you are here." Aunt Jane continued down the aisle peeking over the door of each stall. Orangette was not resting in slumber. Instead, she shifted her weight and swayed, left. Then right. Then left. She turned one ear toward Aunt Jane and rested an uneasy eye on her owner. Platter had evidently been turning laps in his stall. A path was cleared in the shavings as he turned another circle, stopping only to greet the woman.  But Marmalade was.... in trouble.