Pippin sees it. Do you? He is eyeing that piece of grey 2" x 6" on the bottom left of the stall door opening. When we ran out of 2" x 6" pieces from the the cut out area of the barn wall to use in the doorway, we used a piece of the trebuchet... the trebuchet lives on! 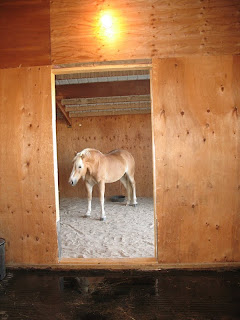 Our son wanted to participate in a trebuchet competition during his freshman year of college. He found two other guys who were interested. Our garage was the birth place for the boys' project.

We had the tools.
They had the knowledge! 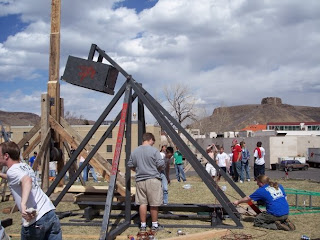 They worked on weekends and sanded and sawed.
They drilled and bolted.
They built it piece by piece
with plans hastily drawn out on scraps of wood,
or from details that existed only in the minds of the boys.

Their trebuchet worked.
The boys earned third place in the competition,
which required that the trebuchets accurately toss
gallon jugs of water specified distances. 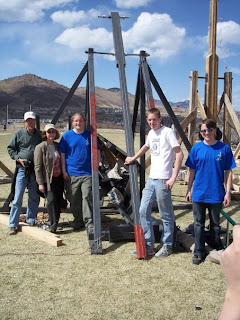 Following the competition the trebuchet was retired - put out to pasture, as it were. When it became apparent that our son did not intend to reconstruct the trebuchet the following year, pieces of the trebuchet found new purposes around the farm. Pieces of the 4 X 4 side braces became saddle racks in my tack room and helped build some walls in the stalls of my first barn. Our garden had a fence post that had a previous life as part of the trebuchet. When we moved, the bones of the trebuchet came with us. The project continues to live on in new ways, and every time I pick up a piece of the steel grey lumber, it brings back memories of the young men working together and enjoying success.