We have a puzzle in our garden.
We planted something... and we don't know what it is!
Now, how, you might ask, could someone be so silly as to do that?!
Well, as you may recall, we had a garden disaster in the form of a major hail storm, just after we planted the garden this spring. Our fledgling plants were squashed...literally! Hubby took pity on me - he never could stand to see tears! He visited the garden shop. He visited the farmer's market. He bought new plants. I planted them. But, I have to admit, my heart was heavy and I just couldn't imagine the plants 'doing' anything. So... plunk, plant and sigh. I know that some plants had identifying tags, but evidently this one did not. It just looked like the other squash plants, so it went in with the squashes. 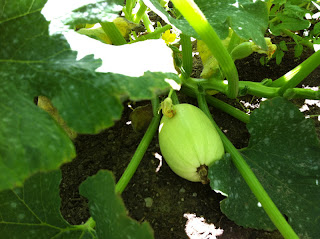 Lo and behold... my garden began to grow; in spite of the hail. In spite of the drought. In spite of the almost triple-digit temperatures. I have bounty from my garden. Dreaming is a happy little gardener, now.  In fact, I had enough little squashlets that I could gift some to Sharron. She was given a bag with yellow summer squash, zucchini, patty pan squash and yellow zucchini. I wouldn't give her the mystery melon.... as I didn't want to repeat the stupid thing I did when I lived at my other home, where I had a volunteer squash-like plant in my compost pile. I gave the interesting globelet 'squash' to my neighbors... uh, they weren't really summer squash we found out... they were baby pumpkins! (And that could be why I had to move - it could be that I was laughed out of the neighborhood!) So last night hubby and I pondered the plant. We stood in the garden, hands on hips, staring down at the fruiting body. What is that? Is it a gray Zucchini? Is it a watermelon? I reached down among the leaves and grabbed that baby, which was the size of a small football. I twisted it and broke it right off it's life-sustaining stem. I committed squashicide.... or melon murder... or something! We marched into the kitchen and grabbed the big carving knife... whack! The object lay in two pieces on the cutting board - with hubby and Dreaming staring down at the hemispheres, trying to place what we were seeing into some sort of taxonomic order. We poked it. We examined the seeds. We smelled it... and later we tasted it and partook of it's fruit, and it was good!


Do you know what it is?

What ideas do you have?

Scroll down...
and down some more for the answer.

Oh, and hubby, while we were eating it, smacked hand to forehead
and recalled that he did buy this type of plant as he thought I'd like it!

Are you tired of scrolling down, yet?

I'm not having too much fun making
the asterisks!

I have to practice finger-gymnastics to type asterisks
and then hit the return key.

Here is the answer to the mystery....

Can you hear the droning music?

Oh, I hope you aren't too disappointed

after having come through all of this....