We are considering adopting another Australian Shepherd. It's interesting to look at pictures and see the names of possible adoptees. We were considering a dog named Poppy. She seemed to suit her name as she was described as being very high-energy. I could picture her popping up and down. That turned out to be almost true. Poppy won't stay in a fence. She pops over them. So..... we can't adopt her. Our fences aren't high enough. Of course,  you will be among the first to know about a new dog when we find the perfect pup companion for Tucker!

Let's find out more about each other in the Blog Hop.
I hope you can join in! 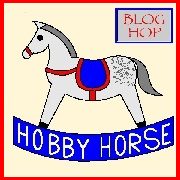 In case you are new... or as a reminder:

Write about one or respond to all.
Or, just link your blog to mine if you
care to share something else about yourself.

I am really enjoying answering your questions,
and look forward to seeing other responses, too.
I think it's a great way to have a conversation of sorts!

Link your post to the Hobby Horse Blog Hop
by using the Linky Tool below.
Click where indicated, just after it says
"You are next...."
Or...
Leave a comment with the answer(s) to the
questions(s) on my blog, down below.

Visit other participating blogs on the list
and respond to their questions in your comments on their pages.

1. How did your horse (dog, cat, other pet) get his or her name?
2. What names for horses, dogs or cats (chickens, guinea pigs..... and so forth) do you think are especially cute or clever?
3. Tell us about your first pet.

My Answers:
1. When I bought Pippin and Doc they were named Rock and Mic. It turns out that a lot of the foundation Haflingers were named A Rock and Modern Micah, and the names are popular among Haflinger folks. My son objected to the horses' names. I wasn't especially thrilled with them. I also thought that with both names ending in a 'k' sound, it might be harder for the horses to distinguish between their names when spoken to. Being a huge fan of the Lord of the Rings, son explained that since my horses were 'haflings' they should be named after halflings, or hobbits. He suggested Frodo and Sam or Pippin and Merry. I loved the name Pippin... and it fit Rock's character. I loved Sam. I could really see Mic as Sam. However, my son informed me, Sam and Pippin didn't 'go' together. I realized that Merry's full name was Meriadoc. I could shorten that to "Doc". That satisfied my son. It worked for me. And, the names really suit my horses' personalities.

We named our Aussie, Tucker for a number of reasons. First, several bloggers suggested the name. We liked the sound of it. We thought that maybe he might live up to the name, "Tuckered Out" and perhaps, just maybe, not have as much energy as most Aussies (that didn't happen)! And finally, Tuck is an Aussie word, so even though Australian Shepherds really didn't originate in Australia, his name harkens back to the land he didn't come from!

Mama Boots came with the name "Boots". When it became evident that she had recently been a Mama, I just started appending that appellation to her name, and it stuck.

2. I met a guy who was driving the cutest team of paint ponies. One was named Biscuit and the other was named Gravy. I felt the names were as cute as the ponies. Although I won't really do this, I have been so tempted to name my next dog, "Password".

3. The first pet I grew up with was a wonderful Golden Retriever, coincidentally named Tuck. His full name was Friar Tuck of Windy Pines. 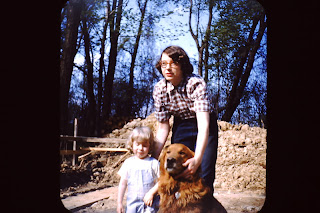 Me, My mom, and Tuck

The first pet I had when I was out on my own, was a mixed breed dog named Cricket. She earned her name by being especially bouncy as a puppy.

Now it's your turn! Write your answers to the questions in a comment, or on your blog. Link your blog to mine using the Linky Tool below.