...in this world nothing can be said to be certain, except death and taxes. - Benjamin Franklin


It certainly isn't a very cheery thought, death. But there it is, staring us in the face. I don't know that it is the light that is found at the end of the tunnel, but more likely it is death itself! It is all around us. It is something we all will know.
As life has grown more complicated by the things we procure, sorting it all out has become more complex. In our ancestor's ancestor's day, one would share his desires upon his death bed. My husband studies our genealogy. Here is a record of death and the distribution of belongings for one of his ancestors:

John Pride of Salem died intestate, and his widow brought in an inventory of his estate, the last, 12m:1647.
Court ordered distribution to his son, under twenty-one years, £ 8, and two daughters, under eighteen years, £ 4 each. The mother was to bring them up. House and land bought of Mr. Holgrave security. Salem Quarterly Court Records, 2:225

Perhaps, if they were lucky enough to have paper and quill, our ancestors would create a simple list of their belongings and designate beneficiaries. Here is a Last Will and Testament from Robert Weekes from 1771, the first husband of a relative of my husband's, 7 generations back!

In the name of God, Amen. I, ROBERT WEEKES, of the Manor of Cortlandt, in Westchester County, being sick. I direct all debts to be paid. I leave to my wife Jemima the use of all real and personal estate during her widowhood for the use of bringing up our children; Also a horse and woman's saddle and bridle and a feather bed. After the death or marriage of my wife I leave to my son Lewis all my lands and tenements. I leave to my three daughters, Esther, Tamorus, and Charity, œ10 each, when they are 18, "And if it should so happen that my wife Jemima should be likely to have another child, it is to be made equal with my other children." I make Job Wright, Edward Smith, and my wife Jemima, executors. - Ancestry.com


With acquired wealth and acquisition of the stuff of life, the formalities of the Last Will and Testament became more formidable. Here is one page of Caption William Pride's will from 1751. It seems lawyers of his time may have earned their fees by writing everything in longhand. 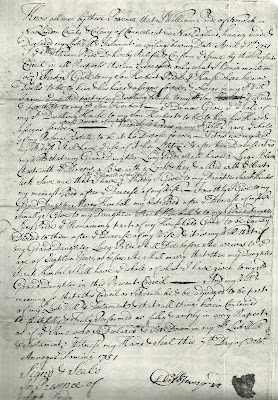 Captain Pride was wealthy for his day, having a three-page inventory worth 5,803 pounds; 10 shillings; 8 pence.
Included in the inventory were:


Our way of living has added a new wrinkle that should be considered when planning for death. What about the part of you that exists online? What about your publications and creations online: the postings on you blog, your email, images and items available through social media? What about access to those items? What about a gaming persona?


Now that many of us have digital property, we should make preparations so that the digital part of our lives can be handled as easily as possible, according to our wishes, by those we leave behind. There are decisions to be made. Who should have access to the content of your blog? Will your Facebook page remain standing? Will your heirs be able to access your online accounts? Our new age has brought new things to consider as we plan for death.


For more information about this topic:

Social Media Policies When You Die

Prepare for Your Death by Creating a Digital Tombstone

USA Gov's Tips on Preparing a Social Media Will

How to Manage your Online Accounts After You Die