I have been so busy with the project house that the boys have had little saddle time. But....when I have ridden them they have been so incredibly wonderful. It makes my heart sing!! I think part a lot of my success is a due to a series of lessons I've taken with some other ladies. We have been practicing foundational work at a facility that trains for Versatility Ranch Horse competition. Yeah, laugh. I do! Can't you see Doc trying to cut a cow? Doc would shuffle to the left about 3 minutes after the cow had left the area! Pippin would take one look at the cow and you'd see me in the next county....still moving as fast as Pippin's little legs could carry him! Pippin knows that cows eat horses, and hefty, hay-fed haffies are their favorite!

Our work has focused on getting and keeping our horse's attention. Our instructor reminds us that we are the ones to tell the horses when and where to move, and how fast. Yup, I've heard it before, but some things I have to hear...over and over and over! (Especially as I get older...what, exactly, happens to our brains?!) And sometimes, I need to 'see' the theoretical in a practical application. For example, at the beginning of one class I was asking Pippin to stand so I could listen to the instructor. He wasn't interested in standing. The instructor turned to me (and I was prepared for her to snarl something about making my horse stand still) and said, "It's OK if he doesn't stand, but you have to make it your choice, not his. Go ahead and make him walk in circles. Make him back. Make him move. Faster. You can still listen to what I am saying."

We have been working on having our horses yield to our legs. You know, turns on the forehand, turns on the haunches, side pass, etc. Nothing new. I've been doing those since Pony Club days. But, for the first time in my life I have had an instructor who has focused more on my seat bones and weight distribution than on my legs. (OMG - that poor instructor has had to stare at my ample a....!)

It's taken a lot of unlearning and relearning. I've picked up some bad habits over the years and our instructor has an eagle eye - she'll catch me in a skinny minute! I found out that I 'break' my wrists and my weight needs to be rolled back. I need to 'suck my belly button into my backbone.' She is a saint. She reminds me, frequently, about my posture!

So, Pippin has been performing the required moves. He has been walking calmly, with his head down. He has been trotting - peacefully! He no longer scoots forward. He doesn't break into a fast-paced, short stepped, panic-induced trot. He has even begun to bring his head down, and we are working on breaking at the poll. He is much quieter with the bit. A lot of what I've been getting from Pippin, I realize, is due to his lovely shade of 'very green'. The lessons have given both of us some gains in confidence. I think this is another critical piece of the puzzle. I was unsure of him, and certainly he was unsure of me and the whole saddle, person-on-the-back thing.

I apologize for the terrible quality of this photo. When I pulled the camera out of my pocket the setting changed, so this is out of focus. But, through the blur you can see me petting Pippin, telling him what a great guy he is. I probably had just gotten an enthusiastic, "Heck, yeah" from the instructor. Followed by an admonishment reminder to "tell that pony what a good guy he has been!" (The left rein is looser as I am petting his neck.) I had just asked him to 'whoa' by subtly settling my weight into my stirrups and creating a 'wall' with my hands. Look at his feet, such a beautiful square stance! Look at his tail - it isn't clenched, he is relaxed! Look at his head set. OMG - he looks like a little Dala horse from Sweden! 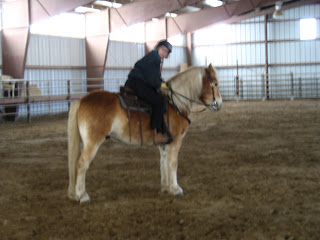 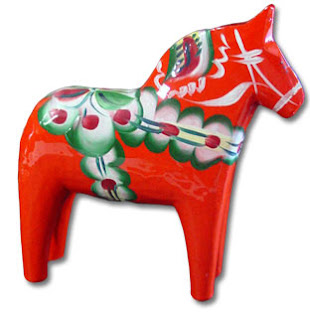 Don't you agree?
Inger, at Desert Canyon Living recently described these Swedish icons. I have always loved these cheerfully painted horses. Although I knew they came from Sweden, I didn't know they were named 'Dala' horses after Dalarna region in which they originated.
I have seen improvement with Doc as well, even though he hasn't gone to endured as many lessons. Doc is trotting... in round circles! That's a huge breakthrough! He will still, sometimes, try to plow the arena with his nose, but more often he has his head at an appropriate level.