Last week I wrote about my first introduction to fowl, when I bought a baby turkey and then a baby duck for my husband's Easter basket. Here's the rest of the story....

My in-laws happened to be visiting us over the Easter holidays the year we acquired the fowl. In fact, it was my father-in-law, Cliff, who was most distressed by the turkling's (Yeah, I know they are called poults, but don't you think 'turkling' is a cuter name?) plaintive cries and he was actually the one who insisted on heading into town with my hubby to see about the duckling. After they returned home with the duckling we had two happy birds. They recognized each others distress and immediately cuddled together in a cardboard box under the clip-on lamp we provided for warmth. Cliff and my hubby got to work making a suitable cage for them while my mother-in-law and I prepared a late dinner. The cage they made was beautifully constructed but, we were quick to learn, totally inappropriate. It was about a foot wide and maybe two feet long, and a bit over a foot in height. What we didn't realize at the time was just how quickly fowl grow. Within short order the cage was far too confining for our unusual duo.

Here is a picture of that old softy Cliff  with the duckling he brought home to ease the turkey's distress. (Apologies about the poor quality - the picture wasn't all that great to begin with and the scanner has indeed died. So I had to resort to a picture of a picture!) 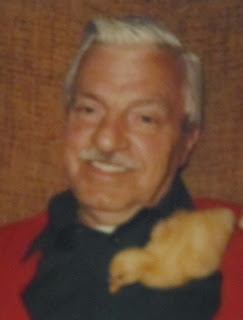 OMG, here is a picture of me with both the turkey and the duckling...a few weeks after their arrival. Do you see them both? Young birds like to stick their head under things and go to sleep - just as they would have snuggled under their parent's wing. The turkey is on my shoulder trying to get his head under my hair and the duck has snuggled under my hand in my lap.(Ewww, look at that track suit!) 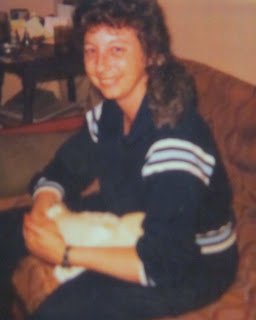 We learned a few things about fowl in those first few weeks, in addition to just how quickly they grow. We learned that mash, especially when wet, smells awful. We learned that ducks will try to swim in any amount of water and they will get water everywhere. Therefore, with a duck around the mash is always going to be wet.  We also learned that turkeys do not particularly care to be wet! So, to keep the birds happy and healthy and to keep our house from smelling like a poultry yard, we built a pen...outside - as it should have been from the outset!

The birds were best buddies from the beginning. Where one would go, the other would follow. It was usually the duck that was the more curious and he would waddle around our yard with the turkey stalking behind.We had a little fish pond and you can see below that the duck enjoyed paddling and dabbling in the water. The plant by the duck's tail was set on a pile of bricks in the water. The turkey would want to be with the duck, and not wanting to get his feet wet, would flap his wings, which grew longer each week, and hop onto the plant. The plant would topple into the water with the turkey, who would then make a mad scramble for terra firma. Yeah, turkeys aren't that bright, the old guy was right, but... the turkey didn't drown in the rain, nor in the pond! 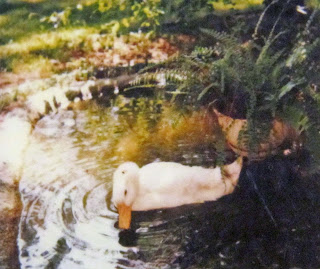 We made a curious parade through our yard when we were all outside. One of us would be in the lead with one or more dogs following us. The duck would waddle after the dogs and the turkey would bring up the rear. Our dogs, two Golden Retrievers, were barely tolerant of the fowl. As seen below, the duck liked to groom the dog. This is Brew, who seems to be saying, 'Mom, do I have to put up with this?' in the second photo. 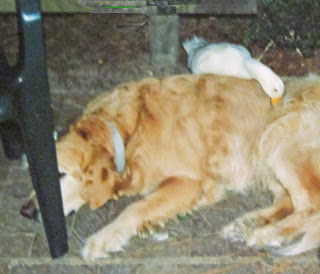 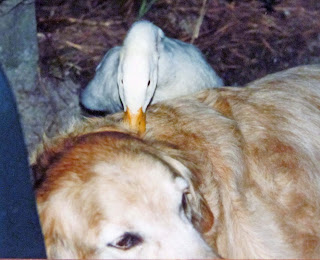 The fowl grew and grew and grew! The turkey was a tom and soon strutted around the yard fanning his tail. He was fascinated by the dogs. He would strut up to them and stare at their eyes, snaking his head side to side. I was always worried that he'd peck at them, as he loved shiny things, but he refrained. What he did do, though, which paralyzed our female Golden, was to flap his wings and hop on her back. He also like to hop up on my head, at least if I was sitting down. Somewhere I have a picture of that, but sadly fortunately can't put my hands on it.
Once the duck and the turkey were full grown we realized that we really couldn't keep them any longer. We lived in a residential area with rules against such things. We had large yards and our neighbors were tolerant, but eventually someone would make a comment to someone else and eventually the high mucky-muck of the HOA would come knocking on our door with some sort of edict in his hands. We began looking for suitable homes for our friendly fowl.
The duck moved to the stable where I boarded my horse. The owner had other ducks, who it turned out, did not particularly care for my duck! They chased him away from the pond, so he took shelter in the barn. It turns out he was a lucky duck as one night the other ducks met with a disastrous end by the fangs of some local, unruly dogs. My duck had the run of the place. He was much loved by the boarders and the only complaint the owner had was that she could never stop the duck from joining parties on the patio when she had visitors. He wasn't 'patio broken' and would leave goopy piles around as he waddled from visitor to visitor.
Our turkey went to live with a family who had a small farm with some hen turkeys and other poultry. He was very much loved by everyone! I often rode by his yard and loved seeing him strutting around with his tail feathers fanned out. He was a beautiful turkey and happily lived out his life with his women.
You'd think that we would have learned that raising fowl in our residential neighborhood wasn't practical, but a few years later....
at February 10, 2011