This week was a fairly quiet one on the battle front. There were a number of skirmishes, but Dreaming prevailed over the incredibly tough and stubborn BloggerButt. The tally for this week's skirmishes:

BloggerButts - 2
Dreaming - 10
Although Dreaming did not attend an official WW weigh-in she reports that some of her jeans aren't quite as snug - oh, and yes, she did try them on after washing, and was not talking about a pair that had already been worn and stretched out. The weigh-in at home showed a slight loss, which, in this battle, is a gain. Woohoo! And, by the way, her ever-friendly Wii did notice that she had not been present for 586 days! But, who's counting anyway?!
Dreaming reports that her exercise regime was less than conventional; No sit-ups. No lunges. No leg lifts. But was probably equally effective. Dreaming explains, "I repeatedly lifted a 2-pound weight. I moved the weight around, which engaged my core muscles. I twisted, which had to do something for my abs. I repeatedly bent and reached for my toes, which certainly worked to make me more supple." And just what was Dreaming doing? Ah, taking tile off the bathroom wall! Each tile took at minimum 6 swings of a two-pound hammer. Multiply 6 swings by over 300 tiles...that's a lot of exercise! 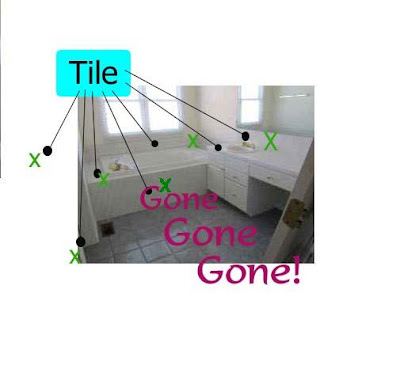 Plans for next week... Dreaming will tackle the floor!
Dreaming is armed and ready for the battles to come. She has her WW tracker and has been trying her best to honestly and accurately report her food intake. She does explain that the BloggerButt is a mean opponent who's greatest weapon is control of the mind. Why else would her mind dwell on fattening foods that are in the cupboard and play a looping video of forbidden foods incessantly to lure her off her chosen path?
Good luck to all in the Battle of the BloggerButts!