No yellow wood, nor grassy path,
nor leaves that no step had trodden black.
But as I walked to the barn this morning
and came across these bunny tracks
Robert Frost's poem came vividly to mind.


Have you found yourself in a situation where two roads diverged?
What path have you traveled by?
Were you required to memorize this poem...
and can you still recall all/most/some/none of it? 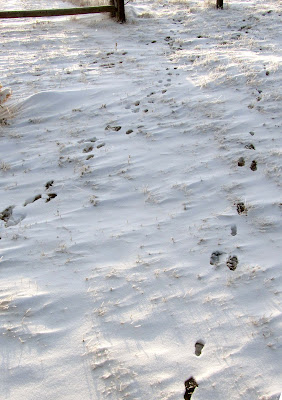 The Road Not Taken
Two roads diverged in a yellow wood,
And sorry I could not travel both
And be one traveler, long I stood
And looked down one as far as I could
To where it bent in the undergrowth;

Then took the other, as just as fair,
And having perhaps the better claim,
Because it was grassy and wanted wear;
Though as for that the passing there
Had worn them really about the same,

And both that morning equally lay
In leaves no step had trodden black.
Oh, I kept the first for another day!
Yet knowing how way leads on to way,
I doubted if I should ever come back.

I shall be telling this with a sigh
Somewhere ages and ages hence:
Two roads diverged in a wood, and I—
I took the one less traveled by,
And that has made all the difference.
- Robert Frost

Postscript:
After I posted my tribute to Robert Frost I remembered a funny riding experience that is somewhat related to this poem. Around the time that we had to memorize it my BFF and I were riding in Mendon Ponds Park, south of Rochester, NY. We often rode together and we would often sing silly songs as we went along. The park had many miles of wonderful trails. At one point the trail split (two roads diverged) for just a short path, and then the 'roads' joined again. We began singing Loch Lomond:
O ye'll tak' the high road and I'll tak the low road,
An' I'll be in Scotland afore ye;
But me and me true love will never meet again
On the bonnie, bonnie banks o' Loch Lomon'.
Our intention was that one of us would take the high path, while the other took the low. We were having so much fun, and being so silly that we didn't hear a horse coming up the low road. The horse rustled the bushes, perhaps because that was the path less traveled by. Both of our horses jumped and my friend and I ended up on the ground. Somewhat humiliated, but laughing none the less!
at February 02, 2011