Farm Friend Friday: My Farming Foundations - or - It's In the 'Jeans'!

My grandmother must have been quite the wild child! She was raised in the northeast in a stately home with housekeepers and  nannies and the expectation that children are seen, but not heard. I can believe that she was expected to sit quietly, in a ladylike fashion and practice her needlework. I can also imagine that she railed against all of that!

This is a picture of my grandmother. She is probably in her late teens. The horse she is riding was not inclined to stand still as I have several photos and the horse has changed position in each one. 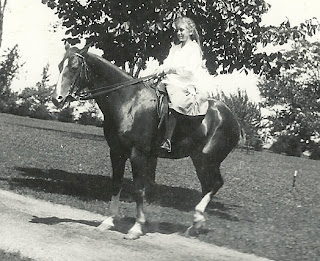 My grandmother married into a "proper" sort of family,  had three children and then divorced. After a second marriage to a sailor who seemed to have sailed away and never returned, she fell in love with a ranch hand on a ranch near Pike's Peak, as I recall, and married him. I am not exactly clear about how she came to be living on a ranch in Colorado, however! Following the marriage they purchased a small ranch in Sedona, AZ, before Sedona became the tourist mecca and "crystal capital" of the west.

This is the south pasture of the ranch. My grandmother, on the left with the gray horse (Kabir, an Arabian and one of her favorite horses) and my grandfather on the right, are dwarfed by one of the most photographed rock formations in Sedona; Cathedral Rock. This is actually a postcard that was sold in town in the late 50's. 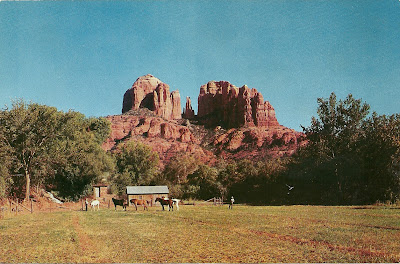 On their small ranch my grandparents raised a few cattle. They had a few sheep. They grew a few peaches. I was fortunate to have the opportunity to spend a month with my grandparents each summer. I loved it! I followed my grandfather around the ranch as he cleaned irrigation ditches and changed the flow of water. I would collect the milk cows from the pasture each morning and I helped with the milking. My grandfather had a large Holstein and a sweet Jersey that he used for milk and to suckle calves he purchased to improve his small herd. My grandmother and I would walk through the field to go swimming in the freezing cold water of the swimming hole. We would pet the cows, and even the Black Angus bull named Baron. I picked peaches and helped package them in purple tissue, nestling each peach in its own cup in the packing crates.
Each year during lambing season twins were brought into the house. My grandmother turned her kitchen over to the lambs and bottle fed them. As I was an eastern school girl at the time, I never got to visit during lambing, but on my summer visits I loved going out into the fields and having the bottle fed sheep come up for some loving.


My grandmother feeding one of the lambs in 1966. 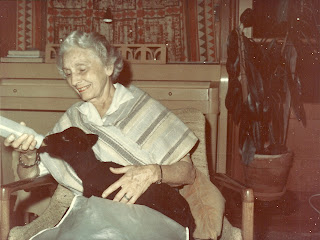 My grandfather introduces a lamb to Jotso. My grandmother found Jotso wandering along the road of the Indian reservation. Having a kind heart she collected him and brought him home. Jotso lived at the ranch for only a short time as evidently he had some Coyote in him. His howls drew Coyotes to the ranch - which did not endear him to my grandfather. I actually think Jotso may have been thinking about leg of lamb in this picture! 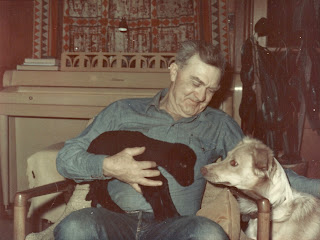 My grandparents have passed away but their legacy lives on. I have been able to visit the ranch and revisit this important part of my youth. The ranch is now the Crescent Moon Ranch State Park, part of Red Rock State Park. I feel some melancholy as I walk the paths and become aware of the void; I feel the absence of my grandparents. But I celebrate in the beauty and the magic of this place that is now made available to others. Maybe they, too, can feel the energy of my grandparents and find that their lives are enriched for having visited this wondrous area.
at February 24, 2011