(Throughout the month of April  I participated in the 2013 A to Z Blogger Challenge. This is my final post. Where did April go?! Each day my post began with successive letters of the alphabet.  My A to Z Blog Challenge topics were inspired by our recent 90-day trip on our motorhome. Click here to see links to other responses to this challenge.)

Z is for Z Backscatter Vans

As we traveled through southern New Mexico and Texas we came across a few border patrol facilities. All traffic was routed through the patrol lanes. 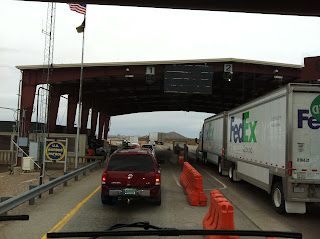 Mr. Dreamy and I could never decide what lane to drive in. Our choices were 'cars'... or 'trucks'. We weren't exactly either. The patrol guys didn't seem to care. They just asked if we were US citizens, looked at our non-Hispanic, obviously of European descent faces, and waved us on. How did they know that we weren't harboring large numbers of illegals in our motorhome? Just think of how many people we could hide in the bedroom, in the closet, in the bathroom, behind the couches, in the bays under the motorhome... etc. We wondered if vehicles were secretly (or maybe not so secretly for those who know about these things) being x-rayed, or viewed with heat-sensitive equipment, or somehow being screened. But then we decided it really didn't matter, because what illegal with any sense would try to hide in a vehicle that is going by way of any of the highways that have permanent border patrol stations?!
My curiosity got the best of me and I had to check it out. Apparently there are devices being used to scan vehicles at some border patrol checkpoints! The technology is similar to that used in airport screening, and the device is housed in a van or small motorhome. The device uses a low-intensity backscatter x-ray beam (whatever that is) and can see contraband and hidden compartments in vehicles... and yes, it can detect someone being smuggled someplace in a vehicle.

Big Brother is watching you!

For more information about this technology:

Email ThisBlogThis!Share to TwitterShare to FacebookShare to Pinterest
Labels: A to Z, backscatter