(This month I will be participating in the A to Z Blogger Challenge. Each day my post will be inspired by successive letters of the alphabet.  My A to Z Blog Challenge topics are inspired by our recent 90-day trip on our motorhome. Click here to see links to other responses to this challenge.)

I took a 'time-out' from our RV trip to return home and check on Dad. My brother also came, flying in on his own airplane. When it was time to head back to retirement, my brother offered to let me fly with him, and have Mr. Dreamy pick me up at  the airport near where my brother lives. Yeah, it is nice having a brother with all of the boy toys! The trip was so beautiful, I just had to invite you to come along for the ride!

My brother’s plane is a 1964 V-tail Bonanza, which he has owned for almost 25 years. He has taken me on a few short flights when I have visited him, but I have never had the opportunity to take an extended flight. 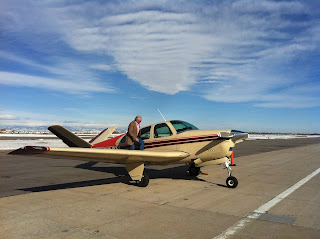 Our trip was delayed a few days because of snow in the Denver area. But, finally the skies cleared and the winds died down and we were ready to take off. 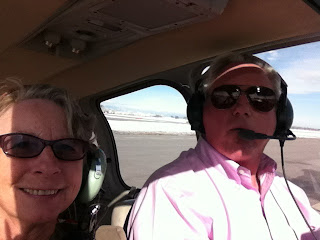 Shortly after take-off...
Hey, look, there's a plane taking off.
Do you see it? 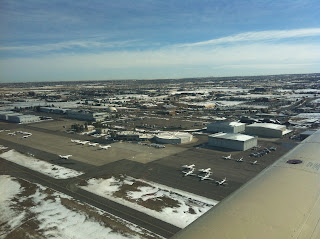 We had to fly over the mountains of Colorado, which meant that we had to climb to 12,500 feet to make it over Wolf Creek Pass (10,856). However, the updrafts were causing the plane to hop, skip and jump, so we climbed higher, to 14, 500 feet, and the air was calmer. My brother was so kind as to show me the location of barf bags before take off, but I was fine, even at the worst bouncy parts. 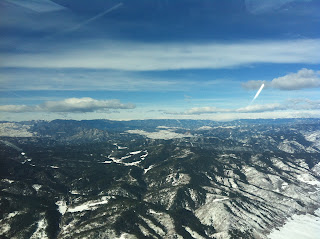 The plane is not pressurized. My brother has oxygen he can use at high altitudes, but his passengers do not! At one point, dear brother did pick up my hand to check my nail beds to make certain they were not blue from lack of oxygen... nice guy, eh?! 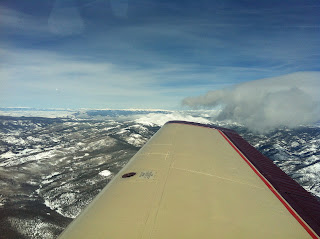 Once we flew over the first range of mountains we crossed the San Luis Valley. This is a high altitude basin between mountain ranges. There is a lot of agriculture in this region, including a large Amish community, possibly where the irrigated circles can be seen. 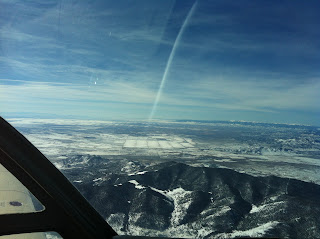 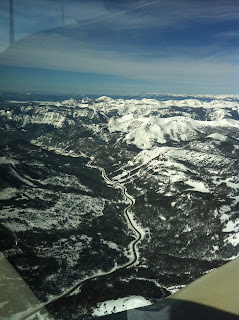 As we left the mountains behind dear brother was able to fly lower, coming down to 8,500 feet. This is Morgan Lake in northern New Mexico. 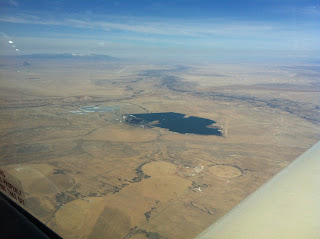 I found it interesting that small planes flying west must fly at even thousands of feet to avoid collisions with planes flying east, which fly at odd thousands. When I asked what planes flying north or south are supposed to do, he just shrugged his shoulders and said, ‘pick one’! 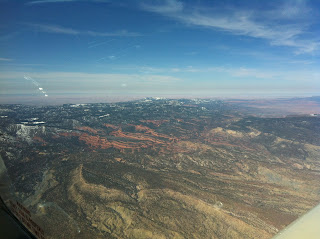 I did not see any other planes in the air, which brother says is not unusual. But, I did see a building smiling at me. Do you see it?! 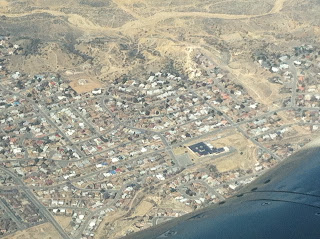 For the most part our flight was a straight shot, from the Denver area to my brother’s home town. That sure beats all of the extra miles one must endure in following the roads I could see from the plane. Our speed of about 180 knots is also beats land speed! 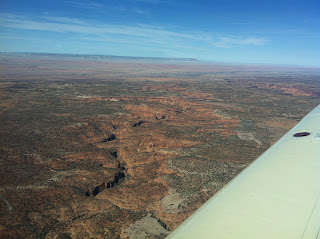 I had a spectacular view of Canyon De Chelly, an historic area once populated by ancient Puebloans. I have fond memories of my grandparents taking me on a trip to this area many years ago. I may be old, but the ancient Indians were not in residence, even way back then! 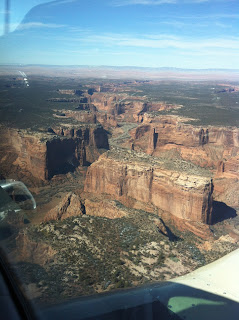 As we continued our flight we could see the San Francisco peaks near Flagstaff, AZ. These volcanic mountains dominate the skyline with the highest peak at 12,633 feet. 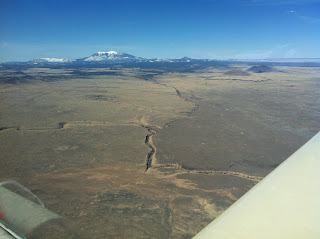 I saw some rock formations in the distance and asked my brother about them. He wasn’t sure what they were called, but as we got to them he suggested we ‘drop down to get a better 'look’ and be brought the plane down closer to the ground. 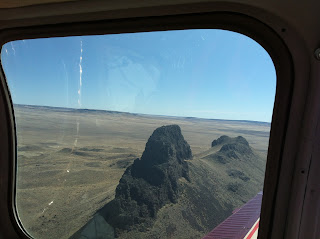 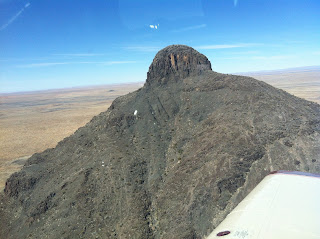 Yep, he is still my brother; still interested in doing things to bug his kid sister!

We dropped down into the red rock canyon surrounding Sedona, AZ. More beauty! 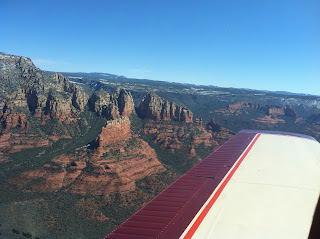 Shortly after my dear brother executed an almost perfect landing. Do you see the runway? 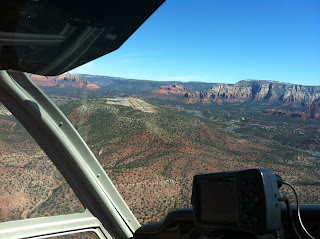 My high flying adventure was over.

I enjoyed every minute of the trip.
I hope you enjoyed it, too!