What Does Wendell Have To Do With Coconut Oil?
A Giveaway!

It's Wendell's fault. He is so darn cute, I always have to check Patrice's blog (Everyday Rurality) to see what Wendell is up to. Wendell is a draft horse that lives with Patrice and he likes loves carrots! He reminds me of my Haflingers... but he is much bigger! 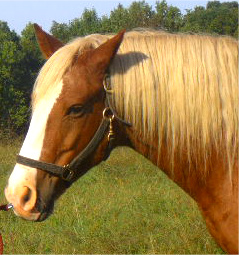 
Imagine my surprise when I received a shipment from UPS.


I received a bottle of Tropical Traditions Coconut Oil.

I checked the packing slip and chuckled. In the Notes section it clearly states that, "Customer cancelled order on 11/12/2012 at 3:15 PM." Well, at least I wasn't going insane! Under the Packing Slip instructions it mentions that this is a "Press Review Sample for www.livingadream2. blogspot.com - Per DG order cancelled in error. Request sent for order to be shipped 11/15/2012." I'm not sure just who DG is, but I guess he thinks he knows what I am thinking, or maybe he sensed my uncertainty about whether to try the product or cancel, or maybe he knew that I'd really, really like coconut oil!

Well, now I have had a few opportunities to try the Tropical Traditions Coconut Oil and I can say that I really do like the product, with one exception, which I will detail below. (That's a sure-fire way to make you read this to the end...right?!)

I have used the oil in four things, so far.

First, I substituted Coconut Oil for half of the fat following a pie crust recipe on the Tropical Traditions site for my Thanksgiving pumpkin pie. 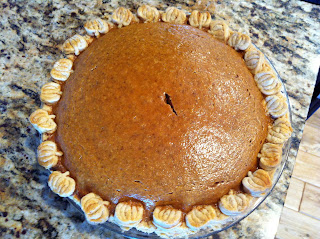 I wrote a post about the pie crust here.

Next, I sautéed onion and mushrooms in the coconut oil... 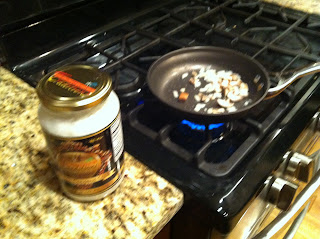 I added the sautéed vegetables to ground beef... 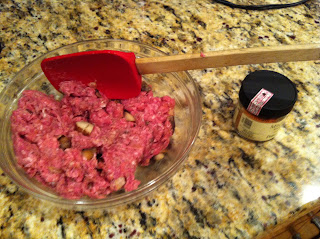 I used a bit of the coconut oil to grease the pan and cooked hamburgers. 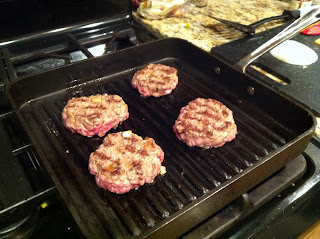 I made crab cakes. 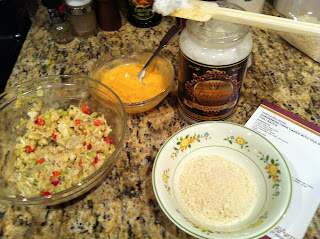 Frying them in coconut oil. 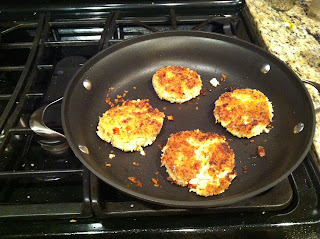 The panko bread crumb encrusted crab cakes were very crispy. They received thumbs up from Mr. Dreamy and from me.

Most recently I made a mushroom ragout over braised pork. I used the Tropical Traditions Coconut Oil to sauté the onions and mushrooms, before adding garlic, cream and cheese. 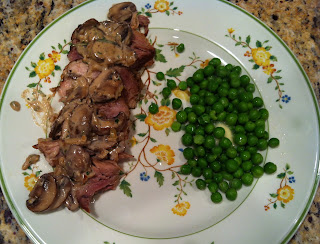 There are so many ways that the coconut oil can be used. The Tropical Traditions Web site lists many other uses here. I have a party coming up this weekend, and figure I will use the oil in cupcakes and in hot chocolate!

I have enjoyed using coconut oil for cooking. I have been pleasantly surprised by the outcome. My only hesitation in giving this product a perfect review is the odor. Don't get me wrong - I love the odor of coconut.  This product has a very light, refreshing odor to it. But, when I am cooking meat or something savory, it seems very odd to smell coconut in my kitchen. However, the cooked food does not smell of coconut and there is no coconut taste to the end product.

Tropical Traditions has allowed me to host a giveaway of their Virgin Coconut Oil. There are two main requirements to enter and a few ways to get extra entries.

Leave a comment telling me how many times I should throw your name in the hat. Tucker says he would much rather pick a winner's name out of the hat than wear it! 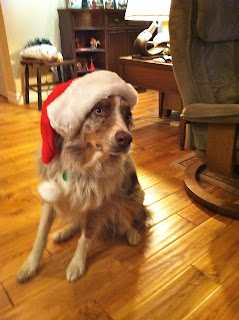 The Tropical Traditions giveaway winner will be announced on December 17, 2012.

Tropical Traditions has asked that I include a disclaimer.... Tropical Traditions sent me a 32 oz jar of Virgin Coconut Oil for free.  I am under no obligation to write a review and I am under no obligation to say something positive about it. I could take my coconut oil and do whatever I wanted with it. But, I did find the marketing strategy rather interesting, and I really did like the product. So... let me know if you want to be entered into a giveaway.... and good luck!