Have you ever gone the wrong way?

One time I went on a day trip with my brother. He happily took off, having it in his mind where we were going. About half way there, after about an hour of travel, he realized he was thinking of the wrong place. We had to turn around, retrace our steps, and then head to the correct destination. (And, do you think I've ever let my 'big' brother forget about his foible?!) 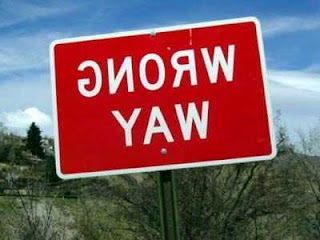 In 1938 a flyer became famous for going the wrong way. Douglas Corrigan wanted to fly across the Atlantic, but was denied permission to do so. He was told he could make an attempt at a nonstop trip from New York to California, instead. Corrigan prepared for his flight. He filed the flight plan to California. He carried a map of the United States, and a few candy bars. Corrigan took off early in the morning, entering a fog bank, and maintained an easterly direction until he landed in Ireland. He claimed he had become confused in the fog and had flown the wrong way. Americans fell in love with "Wrong Way". They liked his reckless abandon and his manner of dealing with government edicts. 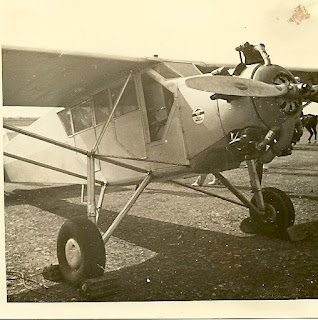 I learned that my grandfather had met "Wrong Way" in Buffalo, NY. My grandfather was on the advisory board for the Buffalo airport for many years. He was a visionary,  recognizing that air travel was the way of the future and more space needed to be set aside for larger landing strips and airport buildings. My grandfather included these pictures in his journal. 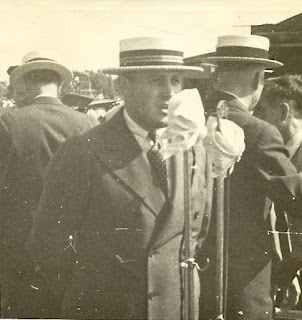 This is my grandfather addressing the crowd at a reception for "Wrong Way".  So, why isn't anyone paying attention to what he is saying?! They are all facing the wrong way! 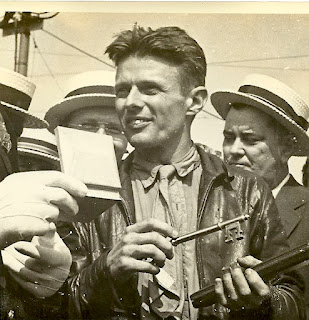 Here is "Wrong Way" Corrigan, with the key to the city.
Yes, America loves the 'bad boy'!