Do you remember cracking up over creative book titles when you were a kid?
I'm talking about such winners as:

The Yellow River by I. P. Daily
Gotta Go by C. U. Later
Under the Bleachers by Seymour Butts
Better Grades in School by B. A. Wiseman
Spots on the Wall by Hugh Flung Poo

Many times when I am out scooping poop or managing manure I think of Who Flung Poo?! This past weekend I knew the answer to that question as I was the one flinging poo. Mr. Dreamy and I had a system worked out. He would get a bucket full of composted manure from our pile, using our small tractor, bring it out into the pasture and dump it into the small manure spreader we have. I would make my way slowly around the pasture, and would return just in time for another load. The manure spreader objects to moving too quickly. Our neighbor at our old house had no patience with the manure spreader. He would drag it with his 4-wheeler, but go way too fast. He would end up bending a piece on the spreader. He'd bring it over to Mr. Dreamy to get fixed. Then, he would break it again. Mr. Dreamy fixed the spreader a number of times. Then, our neighbor had the opportunity to buy a larger spreader from his neighbor, so he passed this spreader on to us. It was a bargain! 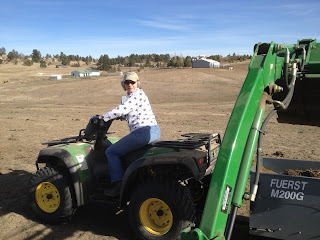 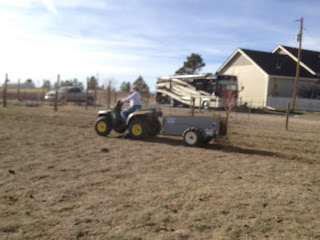 Sorry about the fuzzy picture... but you get the idea!

We still have a substantial pile to tackle the next time we have a beautiful day, and I still need to get out there with the chain harrow to finish breaking up the manure that was left there by the guest horses. Maybe tomorrow.... (I have been saying that for about a week two weeks now!)

If you haven't signed up for the Coconut Oil Giveaway, visit my previous post to get your name in the hat.
at December 07, 2012