Why is it that the men in my life are less than impressed with the treasures I found at the auction? I thought I had come away with some great goodies!
Here are some cute, horse head bridle hooks. I think they are a lot classier looking than the colored ones I can get at the feed store (and heaps better than the tuna fish cans my friend and I nailed up in her tack room years ago!). Tucker didn't particularly care for them. He sniffed them and walked away. Did I detect that his nose was turned up a bit?! Would he have shown such disdain if the hooks were dog heads?? 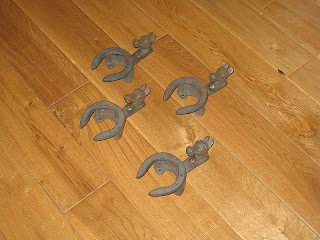 Then there are the saddle racks. I waited at least an hour for the auctioneers to get around to the spot with the saddle racks. I hung around while they auctioned off barrels, piles of old harness, a broken weedeater, a box of horse brushes, a set of salt and pepper shakers held by a rattle snake made out of resin, and more. I didn't once nod my head or lift my hand. I refrained from bidding on lots of interesting things. (Oh, but it was hard to resist the salt and pepper shakers! I had to tuck my hands deep into my pockets! I know just the person I could have gifted them to!) The saddle racks looked like nice, heavy duty racks. There were three of them and I just happen to have three saddles. It was meant to be. Hubby shrugged his shoulders a bit. I may have also noticed one eyebrow lifted... you know, that questioning look?! 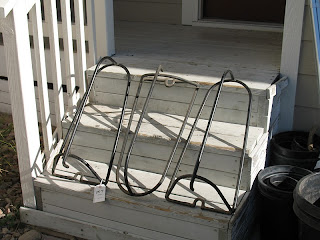 Then, who could resist this charming hose rack? I wasn't going to bid on it, honest, I wasn't. But I certainly couldn't let the other lady walk away with it for only $2.50! I had to one-up her for sure. And I had actually looked at it earlier and decided it was cute, even if I just use the humming birds as a decorative plaque someplace! Hubby was even less excited about this than he was about the saddle racks! 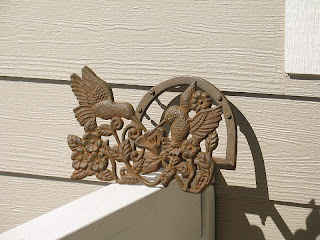 And finally, the wearable window screens! Sure, fly season is basically over... but the flies will be back next year. I think the boys look stunning in their new fly sheets. But, alas, another male faction that appears to be less than impressed. Pippin's only interest was to see if they were edible. Sigh.... 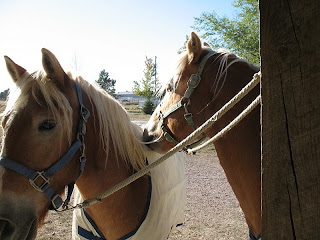