Marchin' to the Boot Scootin' Boogie

I have been ground driving the horses this fall. I've been trying to get out a few times each week, wanting to get as much time in as I can before the snow flies. (And we are supposed to get it today and Wednesday*!) I figure the more hours I have behind the horses, regardless of whether I am in a cart or on foot, the more confidence I'll have in my abilities and the more comfortable I'll be. And heck, it's great exercise! Sometimes I have to remind Pippin that I am behind him and ask him to slow down - especially going up the hills! 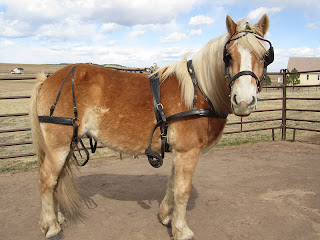 Most of the time I have been using a carriage harness. It's a little lighter weight and is easier to access in my barn. But, yesterday I decided to use Pippin's field harness. (That jumble of black spaghetti in the picture below is actually the reins of the harness, tucked under the back strap - it really isn't that much different from the carriage harness.) 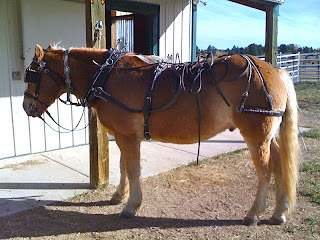 We had a wild ride... er... walk! Pippin has a bad habit of 'scooting' when he is startled. I call it his "Boot scootin' boogie!"  He used to do his boogie move when I rode, and I was so uncomfortable with it that I sent him for some training last year. He still does it under saddle, but not as much as he used to. I never saw him do it in harness until yesterday. So here is Pippin's list of 10 excuses for his naughtiness:

10. The reins on the field harness go through a strap that keeps them on top of my butt. They tickle as they shift left and right as I turn.
9. It was windy out.
8. It was sunny out.
7. I could sometimes see the tip of the whip my Mrs. Owner was carrying.
6. It was warm outside.
5. The weather is supposed to turn cold in two days.
4. Doc was whinnying to me.
3. Tucker was barking at me.
2. Mama Boots was playing in the weeds near me.
and..... the number one reason:
1. My Mrs. Owner kept stomping her big, fat feet!

OK. Guilty as charged! I have to admit that many of the times Pippin did his scootin' it was in reaction to my stomping a foot. I have been doing this periodically to get him used to noises behind him. Yesterday he was scootin' before I even stomped, but I added stomps anyway. So we'd scoot left, then we'd scoot right. I'd ask him to "Gee" and "Haw" to return to the 'scary place' and we kept walking... and stomping... and walking! I had it in my mind that we would walk until the cows came home... wait, I don't own any cows. OK, we'd walk until Pippin stops his boot scootin' boogie. We walked. We walked some more. I stomped. We scooted. We walked. It wasn't working. I took Pippin into the round pen. He really was perturbed by parts of his harness flopping. He broke into a fast trot, the harness flopped, he trotted faster, he cantered. I could sense his concern. I stopped him before he broke into a panicky run. We went the other way. We did this until he calmed a bit. I put the reins back on and we began walking again. I decided that perhaps the occasional stomp was just too unnerving, so I marched! Stomp - Stomp - Stomp! We had quite the little parade as we went around, performed zig-zags and small circles. We stopped and I marched in place. Pippin finally relaxed... a bit and I decided to call it a day!
Hmmmm.... I wonder what the neighbors think?!