It seems that my Mrs. Owner found out that there is a very nice lady that lives nearby that has a ton of horse stuff for sale on the Internet at a place called Rock Horse Ranch Tack. So, my Mrs. Owner went shopping. Only she didn't do the online thing, she actually went there! The reason she went was to get me a new driving bit. Hooray! I won't have to share my bit with Pippin any more. I won't have to wonder what kind of slobber is on my bit. It will be mine. All mine! Mine. Mine! MINE!

This is the bit: 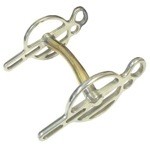 It has a special curvy mouthpiece that doesn't press on a horse's tongue. I can't wait to try it out! It looks really pretty, don't you think?

My Mrs. Owner found more things than just the bit. 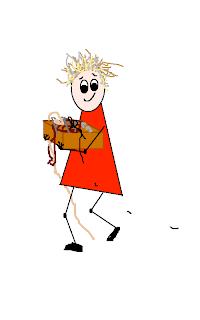 She found some new boots to wear to the barn in the winter. 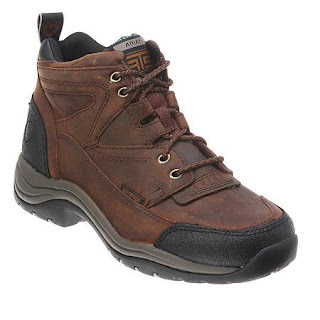 (She did get two of them even though the picture only shows one!)
She found some cute little doo-dads that really go on a harness,
but she might use them for decorations some place else.
(I'm thankful for that... if they jingled on my harness
it would be very annoying!) 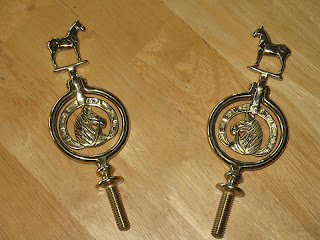 She found some split reins for Pippin.
Ha ha! He doesn't even get whole reins! 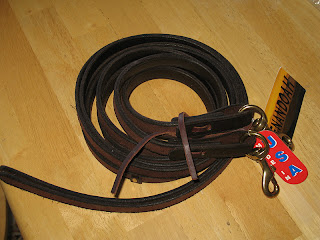 She found some hooks for a curb chain...
whatever that is! 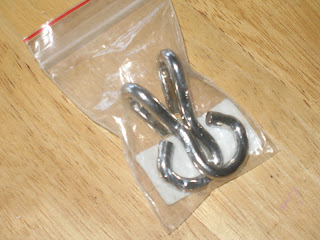 She found a rawhide dropped noseband.
She wasn't even looking for one!
She said it will help Pippin
keep his mouth closed.
Ha-ha-ha-ha... Pippin won't be able to talk
while he's being ridden!

She found some pieces of leather. 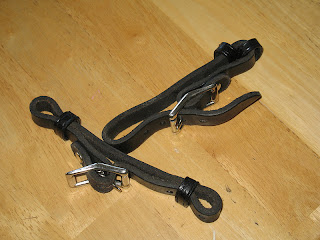 My Mrs. Owner said these would be used as gullet straps
so Pippin can't scrape off his bridle.
The nice lady gave her these...
and a leather keeper...
but Mrs. Owner was really sad 'cause
she dropped it at the nice lady's house.

My Mrs. Owner found all kinds of things.


And I don't think she was looking
for any of this stuff...
I mean, she went to buy a bit!
One bit!
Not caboodles of stuff.
When my Mrs. Owner got home she ran to the barn and put the bit on my bridle. She wasn't sure if the bit would fit. She said the one she really wanted was already sold. She was just hoping this one might work. She interrupted my dinner to have me try on the bit. I wasn't exactly happy about leaving my hay!
And then.... 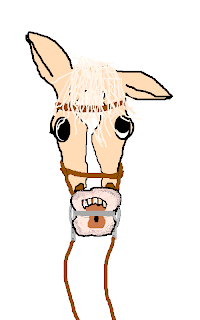 ouch!
The bit is too small. It pinches. I feel like Cinderella's wicked stepsister trying on the glass slipper that is way too small. I feel like I have goldfish lips. Take it off! Get it out of my mouth! Yuck. Ptoooey! I don't care if it is pretty. It doesn't fit!