We had our driveway sealed this afternoon. We had thought about doing the work ourselves - sealing the cracks and then coating it. It really isn't that hard to do... but our driveway is long - and the thought of lugging that many 5 gallon buckets of tar coating and spreading it was daunting. 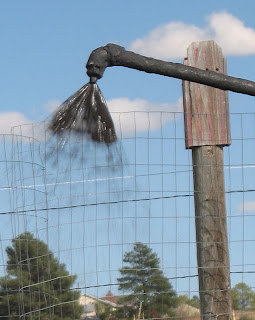 We decided to hire professionals and it was well worth it! Expensive, but nice to watch someone else doing the dirty job! So, we can't drive a vehicle on the driveway for 24 hours. No vehicles. No deliveries.  No ambulances. No heart attacks allowed!


Why would I think about a heart attack? Only because a few nights ago I thought I might be having one!

That night I wandered to bed, after drowsing on one end of the couch, possibly slobbering a bit as I nodded over my book. I was tired. I climbed into bed and was lost to the world of dreams, until a sharp pain jolted me awake just after midnight. I lay in bed assessing the pain. It was bad. It was just to one side of my sternum. It was burning. It brought saliva pouring into my mouth and I broke out in a prickly sweat. Was it heartburn... or was it a heart attack? I sat up and walked weakly into the bathroom, took a few baby aspirin, in case it was a heart attack and some Tums hoping they would put out the fire. I sat on the side of the tub for a while - afraid to move. Not certain if I could walk and not certain if I was going to throw up. The pain got no worse - but it wasn't getting any better. I was cold, so finally I stumbled back to bed, built a mountain of pillows so I could recline and lay there evaluating the pain. It was still quite sharp, but it seemed more like heartburn than pain from the heart itself. I had taken an antibiotic just before bed. Could it be stuck in my throat? Was I having some sort of esophageal spasm? What about a hiatal hernia? Do they feel like this? I knew that heart attacks in women sometimes mimic indigestion. Was there pain radiating down my arm? No. But, the back of my jaw hurt. Was that a sign of a heart attack, or merely the sign that I was clenching my jaw in reaction to the pain? What about my pulse? It seemed low and steady - in the 60's. After about 30 minutes of this sort of questioning I climbed out of bed and proceeded into the living room where dear hubby was 'watching' TV, whilst snoring a bit! I grabbed my computer to look up heart attack symptoms, while swallowing what seemed like gallons of saliva and occasionally pressing on the painful part of my chest.

The NIH listed the following symptoms for women during a heart attack:

The Mayo Clinic suggests that, "the most common heart attack symptom in women is some type of pain, pressure or discomfort in the chest. But it's not always severe or even the most prominent symptom." They list the same symptoms as NIH and add:
By this time hubby has awakened and is asking about my blood pressure. I don't even want to get up off the couch to get the machine. He retrieves it and my blood pressure (which is usually on the high end) is 168 over 108. Uh... a bit too high. I wait and take it a bit later and it has come down to 140-something over 92. Well, that tells me that the pain is real! I'm not imagining it.
I am feeling a bit weak, but the sweat has gone away. All that really remains is the pain near my sternum, a burning sensation and strong heartburn, as if acid is moving up my esophagus. Hubby wants to call 911. I am being stubborn. I really don't think it's a heart attack. I think it is something else... and that would be the Clindamycin, the antibiotic I took just before going to bed. I have been taking this strong antibiotic for a week, since my tooth extraction. Because there was infection involved the dentist wanted to be sure to attack it head on. I'm allergic to penicillin so this was his next drug of choice. It has been tearing my stomach apart since I started the prescription, although the strong heart burn is new. A bit of research about the side effects results in reports from other users of strong heart burn and sharp pains in the chest. Other's commented that it felt like the pill was caught mid-way down the esophagus! Wow! That's what I was feeling! I was reassured. I was not having a heart attack! I remained on the couch and watched TV for a few hours until the pain receded a bit. I wandered off to bed for a good(?) night's sleep.

I've finished the prescription. I don't seem to have any indigestion. No strange pains. No heart attacks tonight! The ambulance isn't allowed to come here!