Gotta Get the Gadget

OK... maybe I am a sucker - but, then again, maybe not.. What do you think?
Recently I went to a cooking demonstration by Janet Sadlack (http://www.microwaveconnect.com) on how to use a Convection/Microwave oven. I learned a few things. For example, if you use the convection oven, and then need to microwave something in a plastic container, put a silicone pot holder under the container to keep it from melting due to the high heat of the turntable. Another thing I learned is that if you are using a 'mix' cooking setting, the microwave won't kick in until the oven gets to temperature. So, it is important to preheat the oven. I also learned that while I am preheating the oven, I can push the 'Convection" button to find out the current temperature.
Janet is a dynamo in the kitchen. In her 60-minute presentation she demonstrated baking cookies, puff pancakes, spaghetti, asparagus, and chocolate volcano cupcakes, among other things. Janet showed us several products she likes to use (and just happened to have some on sale if we had our wallets handy!)

The "Fasta Pasta" spaghetti cooker was one of the gadgets she had on hand. Oh, and it is made in the USA!

The cooker has a place to measure your portions. The amount created with "two" portions would have fed two hungry linebackers for the Denver Broncos! 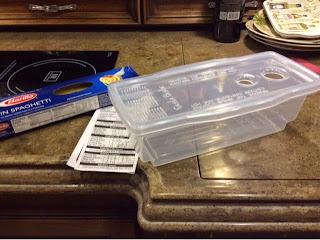 A handy little chart helps you decide how much water to use and how long it should be cooked. The top is not used while cooking, but it has an area to drain the liquid from your pasta when cooking is complete. 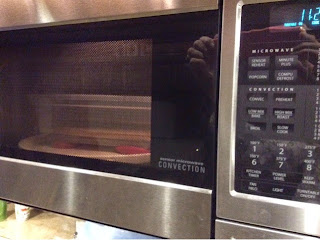 The pasta is finished. The Texas Toast is ready to go in the oven. Dinner is almost ready. (You may notice that I have not said anything about preparing the spaghetti sauce.... trust me... you don't want to know!) 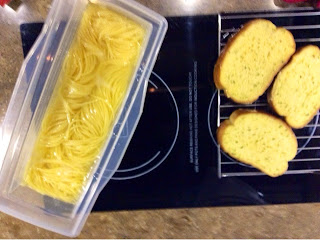 And so, dinner proceeded. But, did I stop to take a picture? Heck, no! I was too hungry after all of this work. You'll just have to use your imagination! However, both Dreamers declared the spaghetti to be perfectly cooked.