We were thinking about heading south, along Arizona 89, to reach I-40. Well, maybe not! I just happened to overhear someone at a campground mention a detour for 89. I checked it out. Oh my! On February 20, 2013 the hillside slid down a bit, taking some of the road with it.

I think we take our roads and safety while driving on them for granted.

This is a screen shot I took from Google maps, satellite view. I am amazed at what can be seen. Look at how the crack extends from the road, down the hillside. You can see they have done some work to stabilize the road and to provide one open lane, although traffic has been rerouted and is not allowed on the highway. 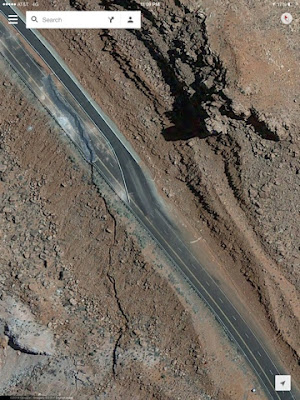 Following the landslide, ADOT worked to pave and fence a dirt road that is now labeled as 89T. Construction on this detour was completed in October, 8 months after the landslide. Travelers now have an improved road they can use.

I found it interesting that an October, 2013 news release by ADOT stated:

The projected $25 million repair is already on the fast track. Design on the repair began in late August and ADOT is meeting with potential contractors this fall. ADOT’s goal is to start construction by mid-2014, if extensive environmental and right-of-way clearances are finalized.

I guess my 'fast track' and their 'fast track' work on different time clocks! However, to be fair, it sounds like they may try to reroute the road to avoid this relatively unstable piece of land, and I guess that would require a lot of work to obtain the right of way.
at April 19, 2014

Email ThisBlogThis!Share to TwitterShare to FacebookShare to Pinterest
Labels: 89A, Arizona, detour, landslide