Scene at a Campground: Hamming it Up

I am not kidding! 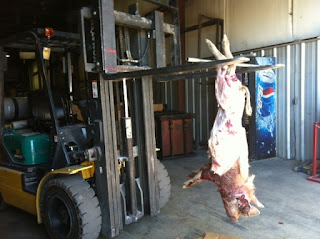 I took Tucker and Gypsy out for a walk while at the Allegro campground and service center in rural NW Alabama.  Our path went by a large building on the grounds. When I looked in the garage, this is what met my eyes. The fellow who was butchering the hog explained (in the thickest southern accent I have ever heard... so heavy that at first I thought he was speaking a different language) that this luckless porker had escaped his pen, only to run afoul of the owner's pit bulls. Well, at least he was resourceful and will make use of the meat.
On a side note.... when I asked permission to take the picture he agreed, as long as I wasn't going to post it online. I told him it was going on my blog, and asked his name. He grinned, and without batting an eye, gave me the name of his colleague!
at February 17, 2013

Email ThisBlogThis!Share to TwitterShare to FacebookShare to Pinterest
Labels: porker, Scene at a campground