Make Hay While the Sun Shines

Well, we didn't make hay, but we did get some things done outside on Thursday, taking advantage of our sunshine and 62* temps! Wow! What a day!

I began my day by deciding I wanted to make a CrockPot meal so I could go to the gym in the evening and not have to worry about getting dinner on the table. So, I did a quick search through All Recipes and came up with Great-Aunt Nina's Noodles and Chicken. I ran out to the store to get some of the ingredients. I am so loving the fact that a grocery store is less than 5 miles away! Upon arriving home I got out the CrockPot. I put the chicken next to the pot... and realized the darn thing was too big! The chicken, that is! So, on to plan B. I pulled out my large dutch oven and put it all together and cooked it on the stove. My new stove has a 'simmer' burner. I put that to work! The recipe called for home made noodles. I've never made pasta before - it was easy and fun.

Then I coerced hubby into joining me on a trip to the local sand and gravel store. Our paddock is a mess!  A river runs through it! The warm temperatures we have been experiencing have finally made some inroads on melting the snow that fell just before Christmas. But, there are still plenty of 'poopsicles' that resist my best efforts to break their bond with the ground.

I wanted something to break up the clay. I can't afford to cover the entire paddock, but at least I can put a thick layer by the gate and where the horses go in and out of the run-in shed. The sand and gravel guys suggested we use squeegee, a small pea-sized gravel. Being the visual person that I am I needed to know what a ton 'looks' like. The fellow said to think of it as a bath-tub full. OK, I want two. Well, we got 1 1/2 tons. Then hubby remembers that the truck, a 1/2 ton pick-up, can only handle 1000 pounds! So... we traveled home very slowly. Hubby and I took turns shoveling all of the gravel out. 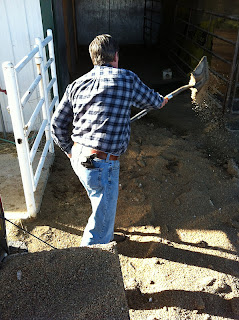 The horses came up to inspect our work.
I had shut the gate as I wasn't sure we wanted knew I didn't want their 'help'!
Hey, Doc, do you think they are spreading food for us?

Pippin, why do you always think of food?
This is boring. I'm gonna take a nap. 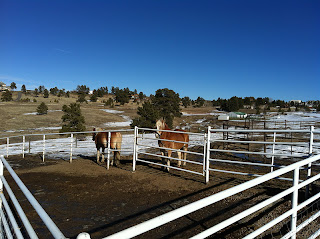 You're right. Since they won't let us help,
a nap sounds like a great idea! 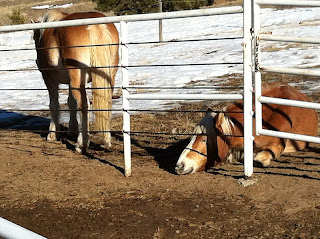 So, even without help from the horses we emptied the truck. Time will tell if the gravel makes any difference in fixing the mess!

Evening rolled around. Since I had some exercise in lifting and twisting... and cleaning up poop, I opted not to go to the gym. But, regardless, it was still nice to walk into the house and smell dinner cooking on the stove! And, how did it turn out? Yum! Hubby declared that it could have used some more spice, but we both agreed it was warm, tasty and filling! 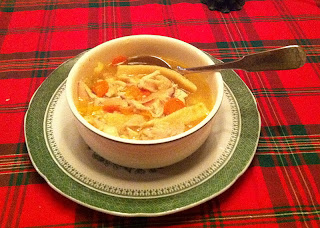 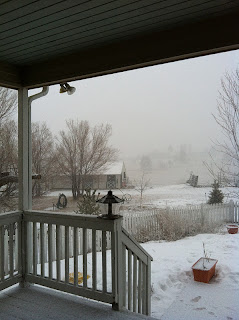 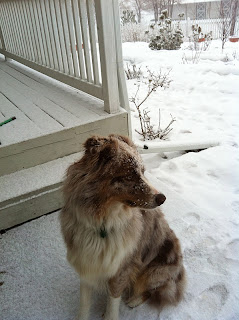 Yeah... that 'haze' is more snow! Since the paddock had finally lost it's white mantel, I just knew it would be covered again! I took these photos around 4 PM and now I think we've had about 4 inches of the white stuff. I really can't complain. I do love it - especially since I don't have to be anywhere in the morning!
at January 07, 2012