Thank you for all of the kind Birthday wishes for my hubby.  He enjoyed my post and was flabbergasted by the first picture: 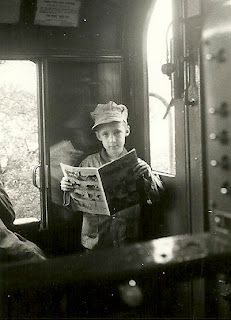 "Where did you find that?" he asked.  Hubby clearly remembers this picture being taken. His dad, and his grandfather were engineers on the New York Central railroad. Hubby is about 6 years old and he is standing in the engine compartment of the train while his dad was acting as the fireman. This could never happen, today, but occasionally hubby would go to work with his dad... riding the trains! The train engine, hubby tells me, was an RS 3 manufactured by ALCO.

Hubby has just gotten a hankering to dabble in model trains. (Although I suspect one doesn't "dabble" when one "does" model trains!) Hubby asked for gift cards for Christmas and used them to purchase some 'N' scale trains and tracks. We've enjoyed visiting swap meets and model train shows in the past few weeks, and Hubby has checked out the local... and not so local... hobby stores. He wants to recreate some of the area where his dad and grandfather worked. Among his first purchases was this engine: 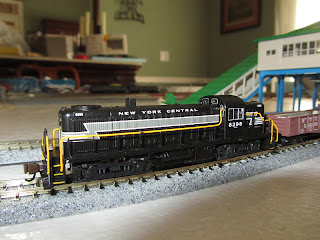 Would you believe? This is the same engine where hubby's picture was taken... and hubby was standing where the arrow points! You can see the curved window and the side window in both pictures! 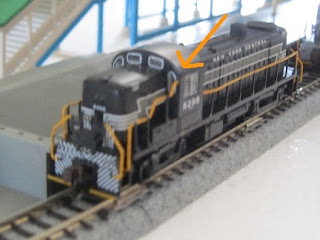