If Chairs Could Talk

From my earliest days I remember these chairs. They were our kitchen chairs when I was growing up. Several years before I got married my parents moved and the chairs were sent to a consignment shop. They didn't sell, even though they looked a lot better then than they do now! Lucky for me! When we were planning to get married my mother suggested that we get the chairs back from the store. Since then the chairs have moved with us from New York to South Carolina and have now landed in Colorado. 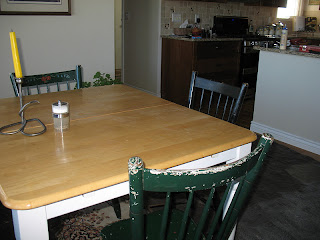 Two of the chairs are black with a Hitchcock type of stencil design. The other two are green, with a folk art design that my mom painted. I always thought that my parents were given the chairs as cast-offs from my Grandfather and that my mother painted two of them, but never got around to the other two. 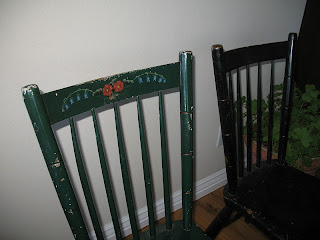 It was always my intention to repaint them.  I was going to paint the two black chairs to match the green. But, after two children and a cockatiel that liked to perch on the chair backs and pick at the wood, I decided it was time to redo all of the chairs. 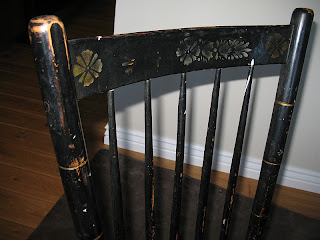 Imagine my surprise when I discovered that the black chairs are not identical to the green chairs. There are a few differences in the size and height of the seat and the angle of the legs. The differences are subtle, so I'm not all that surprised that no one noticed it before. I know my mother painted the green chairs, but based on the fact that there was only a coat of primer and the green paint, I'm thinking she either bought some unfinished chairs or painted some chairs that had previously been stained, or there is the possibility that she was more fastidious about sanding than was I! But, why didn't she paint them black to match the others? Or, did she get the green ones first, and then got the black and never got around to painting them? It's a mystery and I will most likely never know the answer.

I have found out that they are called rabbit eared spindle back plank chairs - that's a mouthful! They could be 100 years old, plus or minus. There are no markings on the bottom of the seat, so no clues there. I don't know the origin of the chairs. I wish they could talk. I bet they have interesting stories to tell of the people they knew and the places they've been! If you have any insight, I'd love to hear what you might know!

Well, just wait until you see what I've done with them! Uh... you may have to wait for a bit. It's taking longer than I anticipated! But, here's a sneak peek at work in progress: 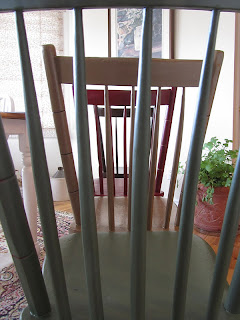 Do you have furniture that you wish could tell you its story?
at January 24, 2012

Email ThisBlogThis!Share to TwitterShare to FacebookShare to Pinterest
Labels: chairs