I finally connected with my neighbor, the one with the beautiful arenas; two indoors and two outdoors! She and I came to an agreement for 'leasing' riding space on an hourly basis a few times a week. Yesterday I tacked Doc up and we walked across the street. We waited for the owner to come down with the contract and then went into the hallowed ground arena. 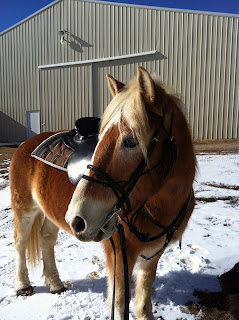 Doc in front of the arena
My Mrs. Owner took me out of the stall after breakfast. She scrubbed some of the dirt off. I was a bit disappointed as I had worked really hard at getting clay in my forelock. Do you realize how difficult that is to do, short of standing on your head in a mud puddle? She put the saddle and bridle on me, slipped some extra hay to Pippin - oh, yeah, I saw that. She thought she had pulled a fast one on me... but I notice everything! The next thing you know, we've walked across the street and a huge door is opening.  I am sucked into a space that is so very foreign. It has to be the inside of an alien space ship. I have obviously been abducted for some nefarious purpose.

The arena is more than perfect! It is huge: 80' X 240'. There are several jumps set up and extra poles you can use as cavaletti. They have some poles set in concrete stands for pole bending and a few other odds and ends. The arena is used for a therapeutic program on Saturday mornings, so there are even some toys here and there, and a lot of small balls near a basketball hoop. Doc isn't quite sure about his surroundings. He sets out at very fast walk, something that is very unlike him. We truck around the arena in one direction, with Doc checking out the jumps. I have him turn and we truck around the arena in the other direction. We zig-zag in and out of the jumps. We go in and out of the poles. Doc walks like he is heading home and the barn is in sight. I have to remind him to slow down! Doc? Needing to be slowed down?!! How could that be? And the trot was even worse. I was wearing spurs and carrying a crop. Both superfluous! We spent a good deal of time trotting, making circles, transitioning down into walk and halt. It didn't slow him down one iota.

The space is very strange. There is stuff all over. There are painted poles strewn about on the ground.They lie this way and that. Maybe they spell out some sort of message. There are what look like small sections of a wood slat wall standing up, all by themselves. They aren't part of the wall, though, they are in the middle of the space. I wonder if they are some sort of trap. My Mrs. Owner is taking this abduction thing way too lightly. I need to take over. It's my job to keep her safe. I'm going to see if I can get out of here, quickly, before the aliens start using some sort of alien rays on us! I walk as fast as I can, and then I trot even faster, looking for a way out.

The owner of the stables came down to see how I was doing. Up until that moment Doc had been fast, but he had been quiet. Then, for whatever reason, he realized he was missing Pippin. He began to neigh, plaintively, and horses from the stable would call back. Doc seemed to get more anxious. After talking a few minutes I went back to walking and trotting, but Doc was worse than ever. Now he was distracted by calling to Pippin.

A human came into the room . She didn't look like an alien, but you never can tell. I'm thinking those alien people can be kinda tricky. I start yelling. I can see some horses outside the alien building. I yell to them. I tell them to get out, get help. They just say, "Hi" back to me. They must have been abducted and brainwashed. Now I really gotta do something. Or we will become brainwashed, too. I start trying to go faster, yet. I keep calling out, telling the aliens to stay away. My Mrs. Owner just doesn't get it. She keeps trying to make me slow down. She keeps trying to confuse me and make me think about something else. Have they already taken charge of her brain?

I waited until we had a fairly decent trot down the length of the arena without my having to tug on the reins the whole time. I waited until I asked for a halt, and got one. After cleaning up a bit, you know, those little round 'apples' that seem to appear out of ... nowhere,  we left the arena and had a fast, but uneventful ride back home. Doc was sweaty - it was warm, on top of his working faster and harder than he normally would. I still can't figure it out. My horse must have been abducted by aliens!

Finally my Mrs. Owner took me out of that place. I felt a bit better then, and I felt great when I could finally see Pippin. I neighed to Pippin to tell him that I was OK. The aliens had tried to take me away, but I was brave and strong and fast. They didn't get me.
at January 20, 2012