Shoes Make the Man... or... Changes in Altitude

I wanted cowboy boots. My mother wouldn't let me have them. She claimed that wearing cowboy boots would make my toes irretrievably and forever crooked. I had to wear Stride-rite oxfords or my feet would be misshapen for life. 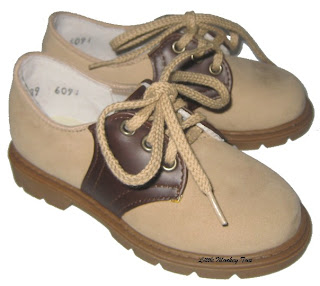 Source
Fast forward a bunch of years. At that point I had my own child.... and by golly, he was gonna have cowboy boots! Crooked toes be damned! (It turns out that my mom was wrong, anyway. Despite my having to suffer through wearing ugly brown oxfords for most of my youth, my toes are crooked and cause all kinds of problems in my 'later' years!)

My guy was two when I saw the cute little boots at the store. It immediately brought to mind my deprivation. I bought them immediately. Just seeing the joy in my son's eyes as he tried the boots on and walked swaggered around the house made me realize I had made the correct decision. My sweet little cherub was immediately transformed into a little buster when wearing his boots. 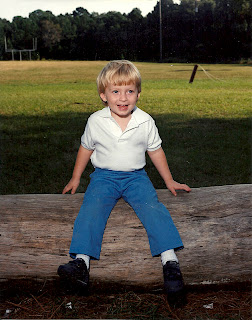 Could cowboy boots transform this sweet child into a monster?!!
The boots were magical. They had power over my child. He became a miniature version of a larger than life John Wayne when he pulled on the boots. I am not kidding, as soon as those boots went on, my son went through some sort of transformation. He walked differently, talked differently and had a totally different attitude. I thought it was cute.... in the beginning. It was an interesting study in child behavior.... at first. But then.... I got 'the call'. My son's preschool teacher called. It seems that my sweet little darling became a monster when wearing his boots. I wasn't just imagining the change in his attitude. They were seeing it as well and asked that I please refrain from sending him to school with his boots! Apparently the boots made him feel like some sort of big guy, raising him up all of 1 inch in height (but when you are a short little guy, that's a huge 'lift'!). He turned into a bully,  and he would strut across the floor, kicking toys across the room and knocking down block towers with his new boots. The boots were relegated to the dress-up bin and my son reverted to the sweet, cherubic child I knew. And at 23 he continues to be a kind, caring young man! But I wonder.... what would happen if I gave him a pair of cowboy boots for his birthday????
at January 16, 2012