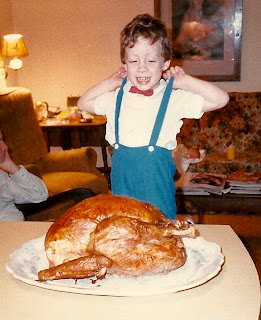 Thanksgiving 1988
I talked with a friend yesterday who told me she had her turkey for Thanksgiving and had begun preparing some dishes that she was going to freeze until THE day, and had laid out the ingredients of other dishes. She had washed her best china and ironed her favorite table cloth. She kept going on and on and on about her preparations. Oh, crud, is Thanksgiving next week?!! I haven't done a thing yet! I guess I better figure out the menu and do some shopping.

My boys are coming for Thanksgiving. At least one is bringing his girl. In fact I received a happy iChat message from son wondering if son and girl could come a bit earlier. Originally he was flying in on Thanksgiving itself, but then found out he had the week off, so he's coming on Tuesday. What fun! Oh no! That means I have to everything done two days earlier!
As far as food for THE day goes, I know that my shopping list will include a turkey and the fixings to stuff it. I need to get some sweet potatoes to make a whipped casserole. That's a request from the boys. I've been told that a Thanksgiving meal isn't complete without mashed potatoes. I'm trying to decide whether to do the ubiquitous pumpkin pie or make a pumpkin cheesecake. I made one a few years ago that I baked on top of a 3/4" carrot cake. It was rather yummy. No green bean casserole here, but I will have some sort of green vege. And of course, we'll have cranberry sauce - plopped straight out of the can into a perfectly sized cranberry sauce dish - again, a family favorite!
Will you be cooking a Thanksgiving meal?
Do you have family favorites that must be on the table?
Do you prefer whole cranberries, either from the can or prepared from the bag, jellied cranberries or a cranberry relish?
at November 16, 2011

Email ThisBlogThis!Share to TwitterShare to FacebookShare to Pinterest
Labels: Thanksgiving