Today was a beautiful day and I was carrying a heavy load of guilt on my shoulders for not having done anything with the horses in over a week. They look over the paddock fence at me, and another layer of guilt jumps on the pile. They appear to be saying, "Please come do something with us." In reality, they are probably trying to take control of my mind and they are saying, "Please come feed us something." I mean, they are haffies, after all, what should a person expect!

Pippin's stifles were a bit sore last week so I decided I wouldn't ride him. But, he didn't give me any of those ticked-off "don't touch that" looks during grooming when I rubbed them, so I decided that ponying him from Doc might be a great way to give them both some exercise... and maybe we could explore the trails across the road from our house.

I received an infusion of common sense (where did that come from?!!) that pointed out how idiotic it was to ride one horse, pony another, neither of which have had exercise in over a week, in heavy snow that is sometimes a foot deep, on a trail I've never been on, where we might run across horse-eating deer (hubby pointed that one out), so common sense prevailed and we set forth in the pasture.


We had a great ride! 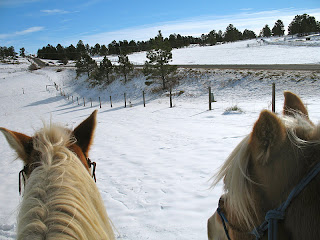 I spied canine tracks over Pippins ears.
Dog? Coyote?
Probably fox, as we saw some kits in this pasture in the spring. 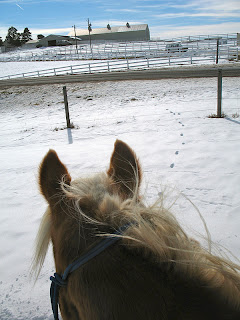 It's a bit diffiult to see the prints in the picture below.
The trail leads between Doc's ears.
Off we went to track the varmint. 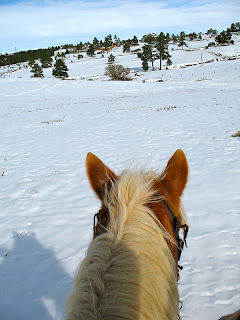 I don't think the horses found our 'fox tracking' session to be terribly exciting. And frankly, it was a bit of a letdown when the trail didn't 'go to ground' but merely passed on into the next pasture. Despite this I think we all had a nice outing that reminded the horses of their job and reminded me how much I love my guys!


Oh, and for my southern friends who think I must be insane to ride in the 'cold' - it was probably around 50, maybe higher. I had a jacket on (unzipped), but only because I needed the pocket for my camera.  I wasn't even wearing gloves! The weather in Colorado truly amazes me. With the dry climate and the intense sun, winter* snowy days can be very comfortable.

* I am reminded that we are technically still enjoying 'fall'. Winter doesn't begin until the Winter Solstice, December 22.
at November 04, 2011