A coyote got one of my cats this morning. Ever since acquiring two barn kittens last year I knew that life expectancies are short for barn cats on the prairie and I worked hard at not getting attached. So, emotionally, I'm OK I think!

There are a few curious things about all of this that I find interesting (hindsight being 20/20):

First, I have a neighbor who called me to tell me the sad news. What a wonderful woman. That couldn't have been the easiest phone call to make. But I really appreciate it. If she hadn't seen the coyote leaving our pasture with something black in its mouth, I would have been looking for the cat and then wondering. Sad as it is, it's nice to be able to know the end of the chapter. We had a cat wander off years ago, and I still wonder about what became of him!

When I went out to set the horses up for the day Doc was excited. He is normally a very mellow fellow, but this morning he pranced into the extended paddock area and snorted a few times. He was mesmerized by something to the west of us, in the open area behind our house. I didn't see anything. Pippin picked up on his cues and also looked, but didn't tarry... I had just put down a bit of hay and food is food! My neighbor said the horses were really carrying on when the coyote was nearby. I'm betting that Doc was watching the coyote - long before he came into the pasture.

The cats, Thing 1 and Thing 2 (or alternatively; Kitty, Kitty), were litter mates. Thing 2, the one I lost, was the bolder kitty. She would let me pet her and occasionally pick her up. Over the past few weeks Thing 2 has become bolder with Tucker. She used to run and hide from him, but recently has been standing her ground. Probably not a good thing in coyote country. This morning Thing 2 was happily hunting something in the pasture when I left. She was stalking whatever it was and pouncing. She did this over and over again, so I'm thinking it was some sort of insect that she was intrigued by. That behavior caught my attention and most likely caught the attention of Wile E Coyote as well.

Thing 1 is the reserved, quiet cat. She rarely speaks. And she most often stays out of sight. This afternoon I went down to let the horses out for a bit of grazing before I got the phone call. When I went into the barn to do water and evening hay Thing 1 was talking to me. I immediately had my suspicions. Something like this had happened about a month ago with Thing 2 (the cat I lost) trying desperately to let me know that I had shut the barn door and her sister wasn't inside yet. As soon as I opened the door and called, the cat came flying in, and Thing 2 settled down - she had gotten her message across. I guess that Thing 1 was trying to tell me that something terrible had happened, and as I said, it was very strange. So when my neighbor called, I wasn't all that surprised.

Poor Thing 1 won't have anyone to cuddle with tonight. It is sad. I just hope that Thing 2 didn't suffer and that the end was quick and painless. RIP kitty, you will be missed. 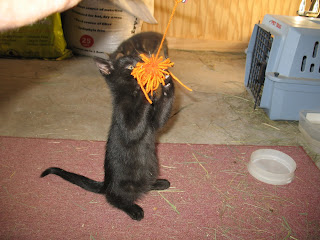