My hubby left Thursday morning. No, no, no... not to worry, he's coming back - he just went to visit his mom, who turns 89 today.  His departure was a bit hasty as we received a call that the alarm on our project house had gone off, and the house is on the way to the airport. It turns out that the vibration from the hammers of the workmen working on the siding had set off the sensors that detect broken glass. Well,  based upon the time of the call we know that the workmen did begin work around 8, as they had said they would!

I set to work on projects at our current home: some packing, some cleaning, some painting and sanding. I began with sanding the deck. Uh oh.... guess I can't do any more until I get a new belt! 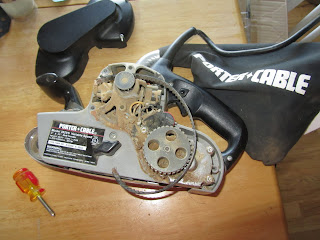 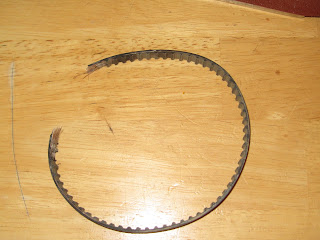 I had the chance to ride shotgun... twice! On Thursday and Friday I went along for a drive with a friend who has so many Haffies - I can't keep them straight! On Thursday we went out with Midas and on Friday we were hauled around by Maestro. Maestro is the smaller of the two Haffies, but he has twice the go! Riding with others has really bolstered my confidence.
I lost my phone. After our drive I reached to my back pocket to get it.. and it was gone. It was an awful feeling. And strangely stupidly,  I kept feeling my pocket, desperately hoping that maybe the results would be different. We backtracked our steps to the barn and down the driveway to the road. We hopped into the car and retraced our path over almost 5 miles. No phone was visible along the dirt roads. Luckily, they are lightly traveled, but apparently someone had come along and picked up the phone or perhaps a vehicle had ground it into the dirt.  The hollow aching spot in the pit of my stomach changed frequencies. My friend pulled out her phone and dialed my number and surprise! Someone answered! A fine upstanding citizen had found my phone on the road on his way to the Firestone Tire store in town. Guess where I was headed next?! I arrived at the tire store, thinking, "No, sweat. There won't be that many men in the waiting room." Well... I was sort of right. There was no one in the waiting room.... there were about 200 people right outside the door, however! The tire store had recently opened and they were having their Grand Opening celebration, complete with food, a band, face painting, dignitaries, and a quartet of kids on woodwinds playing the National Anthem.  Eventually an employee helped connect me with my phone - I was complete again!
I drove into the city to the tool repair shop and purchased a new belt.
I spent so much time away from my projects this week, I'm thinking I need to buckle down and get some things accomplished. I guess it's time to tackle that deck before the sun turns it into a frying pan!
I hope you have a wonderful weekend! What plans do you have? I bet they are a bit more interesting than sanding and painting!!
at June 25, 2011