Tucker Talks: Who's the Scaredy Cat?

Mom yelled at me today. She said it was because she was ascared. She said that she would have laughded if she hadn't been so ascared.
You see, Mom and Dad and me were outside. Mom had that nasty long yellow rope on me. I hate it. It gets all tangleded up in my feet. But Mom insists that I wear it. I don't see other dogs wearing yellow ropes. She says it's on account of I sometimes runs away to play with Little Tyke or to chase the little yellow striped fuzzy thing that lives a few houses away. It is so much fun to race after that thing 'caus it runs so fast. Funny, ha ha, you are such a fraidy cat! I can make you run! And, when I get running like that, with the wind in my ears, if I even hear my mom calling, I just can't stop. Ya know what I mean? 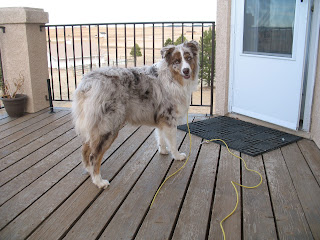 But, anyway back to my story... Mom was helping Dad put some big thing on the back of the truck. She took her eyes off of me for a second. She wasn't watching me no more. Ha! I took advantage of that and snuck away. I slunk towards the pasture. The two big fuzzy guys were there. I belly-crawled under the fence. Mom still hadn't seen me. Ha! This is gonna be fun! I runned after the fuzzy guys. Boy, was that fun. But.... the fuzzy guys turned and started chasing me! Wow! That was scary. My mom said that she wished she had a camera. She said that if I had a tail it would have been tucked between my legs. I runned and runned as fast as I could. The big fuzzy guys runned too. Their feet sounded like thunder. They came really close but I got under the fence in the nick of time.  I went right to my Mom and kinda hid behind her. I don't know if I'm gonna do that again.. at least not for a few days!


Hi, I'm Tucker. You look even bigger up close! 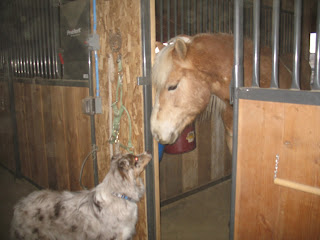 Uh, Mrs. Owner, could you, like, get him out of here
before I decide to do something that might not be too nice? 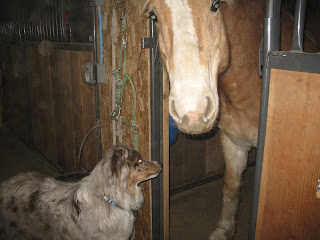 Email ThisBlogThis!Share to TwitterShare to FacebookShare to Pinterest
Labels: Tucker