OK - one last post about the Fiesta. I wanted to share information about one of the balloons - one of my favorites - and respond to a few of the comments I had received.

We were warned to be careful with our dogs. We were told that the burners, and big shapes going overhead can really frighten them and that we should make sure to hold onto them tightly! Tucker and Gypsy were fine. Well, Gypsy doesn't exactly 'look' fine in this picture, but that was because she didn't want to sit and stay while I tried to get a picture! The biggest problem we had with the dogs is that there were only small patches of green stuff for them to... well, you know what I mean, and those patches usually were loaded with goat heads - aka puncture vine. The second that Gypsy would pick one up in her paw(s) she'd stop walking. Tucker, however, would tough it out and limp along until I noticed. I do not care to take goat heads out of paws... they hurt! 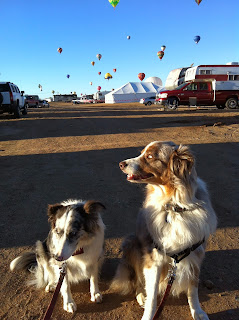 I have also heard that horses do not like hot air balloons. My Haffie friend, Camryn, had an experience with a balloon. However, there were horses patrolling the hot air balloon field, and some even came over to the campground. The horse owners had to spend some time prior to the Fiesta to desensitize their horses to the balloons - taking their horses to some of the most often used launch sites to give the horses a chance to get used to the idea of large, floating predators in the sky.

And now, a bit about my favorite balloon, Airabelle - a word play on Clarabelle Cow! Airabelle is HUGE! It was fun to see her and magical to see her fly. This cow can only jump over the moon on very calm mornings!
Airabelle is like a floppy, gangly, sleepy child when she is being inflated. It takes a lot of hot air to fill her up. While she is becoming one hot cow, she tips and bows, and bobs her head. Her large, fleshy udders waggle back and forth. Just when you think she is ready to go, her legs give out and she stumbles to the launch field.

We could see Airabelle's head from the RV campground even before she was launched! She's that tall.

The first day we saw her poke her head up over the campers and buildings we were disappointed by her failure to launch. The next time she was inflated, we were satisfied. Airabelle lifted to the sky and drifted in the light breeze toward us, landing in the field in front of us.

It's a good thing that Airabelle is a gentle giant. I certainly wouldn't want to be stepped on by a hoof the size of a barn!