While I was out in the yard I became aware of the sound of an engine close by. We are on the approach to a small airport, and the planes often fly overhead. However, I realized this sound was a bit louder than usual, and when I turned, I saw a plane flying especially low. As I watched, the plane went over my head. I felt like I could reach out and touch it. The plane flew beyond me, and it seemed that it was flying too low to clear the trees on the hillside opposite my house. My heart came up into my throat. 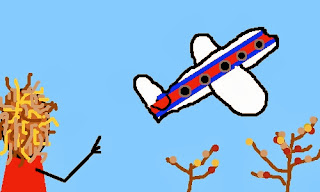 At the last minute the pilot pulled up, barely brushing the tips of the trees. He climbed and made a sharp turn, coming back in my direction, but his altitude was decreasing to the point he was once again just brushing the tops of trees. His plane was lost to my sight behind our big barn. 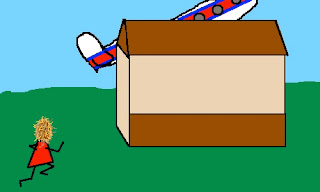 I ran in that direction to try to keep the plane in sight. As I rounded the barn, the plane's nose came up and it stalled, flopping down on its belly and plowing a furrow in the pasture beyond our barn. It looked something like a whale smacking the water after it jumps. The plane bounced once or twice, and settled amidst the dust and debris. The air was suddenly quiet, such a sharp contrast to the previous din of straining engine and rending metal.  The only sounds for the moment were the creaking and pinging of the plane as it shifted and settled into the prairie grasses. I wasn't sure whether to run to the plane, or stay away in case it caught fire. As I stood in indecision, the door opened and the passengers and crew, 12 people in all, came out onto my pasture. They were shook, but unharmed, and wandered toward me in a daze. 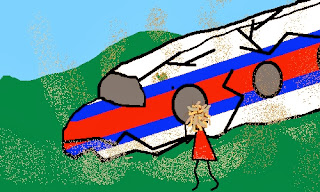 I ran up to the small group to see how I might help. In the back of my mind I was thinking that this was going to make a great blog post, and wished I had my camera.

The dream played itself out, but when I awoke, I shook my head in disbelief... how amazing that even in my dreams I think about blogging! And that, dear readers, is the plane truth!