On our recent trip to Albuquerque we took a side trip to Sky City. Sky City is the ancient home of the Acoma tribe of Puebloan Indians and is the oldest continually lived in city in North America. The mesa top village dates from around 1150 AD. The ancient tribe moved to the top of this mesa for protection after their villages in the valley, and later on a neighboring mesa were plundered. A number of families still live on the mesa full time, and others use the family adobe homes during feast days. 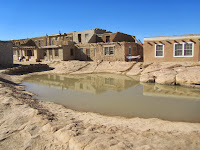 The mesa-top village is much as it was a thousand years ago. There is no electricity and no running water. There are a few collection "ponds" where rain water puddles among the rocks.
The adobe structures seem to have sprouted from the land of the mesa. 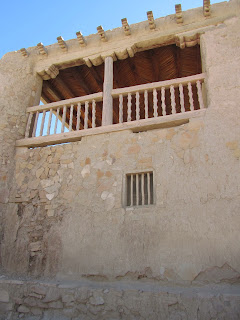 The original structures had no doors on the ground level. Access was from the ladders that could be pulled up to keep invading peoples out. The structures in the village included homes and sacred Kivas. 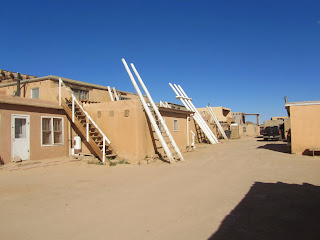 The society is matriarchal and the homes pass to the youngest female. 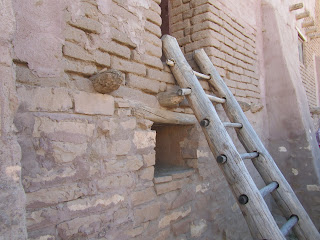 In the early 1600's the Spanish came to the area to inculcate the Pueblans in the way of Christianity. Father Juan Ramirez oversaw the construction of the San Esteban Del Rey Mission Church. The Acoma were forced to construct the building, carrying long lodgepole pine trunks almost 40 miles to hold up the ceiling. Many of the beams visible in the building today date from the construction period! The Acoma have protected the building through the centuries and it is a revered holy site, not because they turned to Catholicism, but because bodies of their ancestors who died during the construction are buried within the floor and walls.


Outdoor adobe ovens are still used to bake traditional breads. The oven is heated with burning wood. Once the oven has reached the appropriate temperature, the wood is pulled out and replaced with the items to be baked. The oven is closed with a stone and left for many hours while items bake in the residual heat. 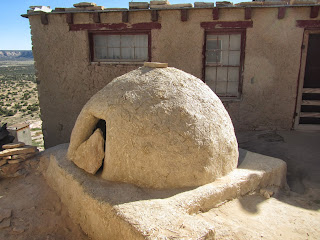 The brightly colored paint is supposed to keep bad spirits from entering the building. 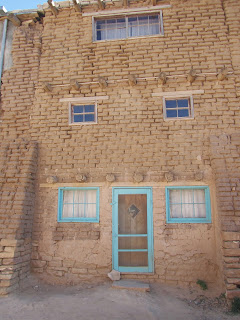 Brightly colored porta-potties are found throughout the village, as there is no running water. They are quickly taking over the more traditional outhouse of years gone by. 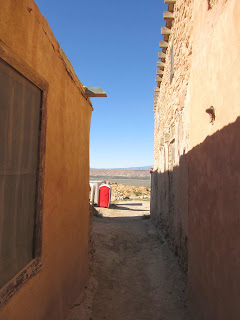 This is a Sky City traffic jam; port-potties on the move! 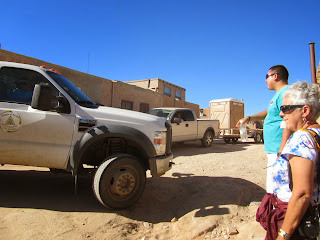 The Acoma make beautiful pottery with traditional designs and colors.
Many artisans sell their work along the streets of Sky City,
This exquisite quilt demonstrates some of the deep red-orange and black designs.
This is the Acoma parrot motif. 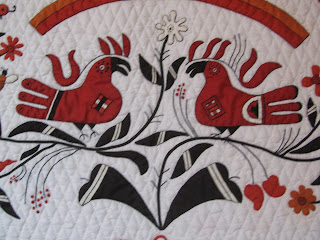 Tickets for tours of Sky City are available from the Sky City Cultural Center. The Cultural Center, itself, has a museum, a video presentation, gift shop and a snack bar. If you are in the area, it is well worth the time and cost. 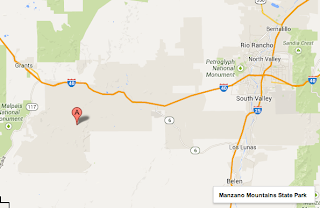